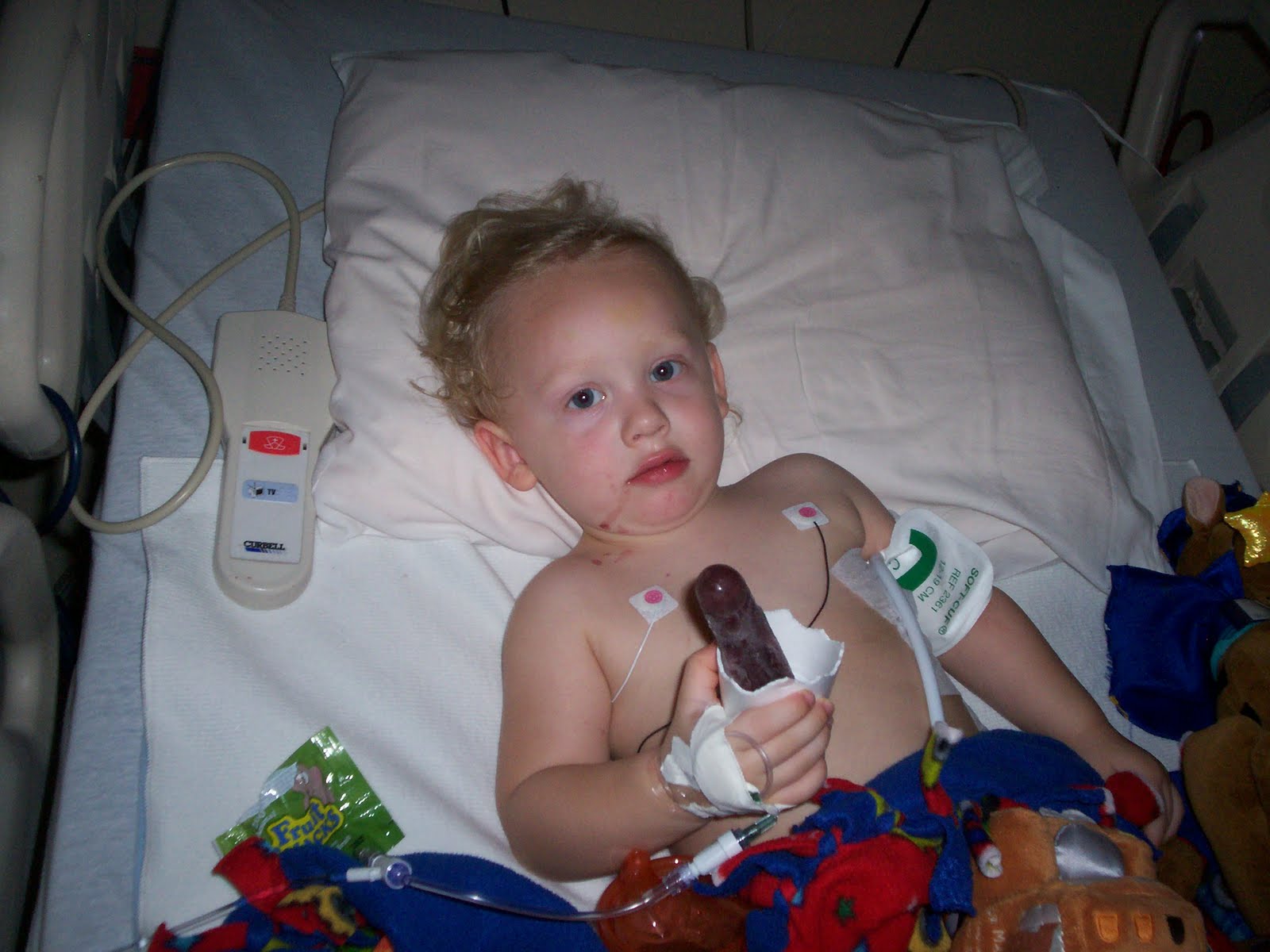 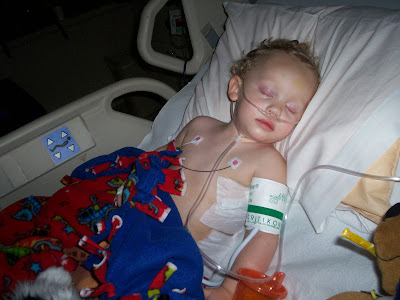 We came to the hospital yesterday at 7:30 am to start the process of getting my little Robert prepped for surgery. Well, it wasnt easy at all. Yesterday was also the first day of school for my daughter, so my husband had to stay at the hospital while I went to the school for a meet and greet and to leave her at her first day back at school. I didnt realize how much this whole surgery idea had affected my daughter. I think it wasnt until we dropped Robert and my husband off that Estrella really understood what was going to happen to her little brother. So on her way to school she cried because she was scared for him. I comforted her and assured her that her baby brother would be just fine, that this was needed so that he wouldnt be sick all of the time. Once we got to school and she saw all of her friends she was ok. I got back to the hospital around 9am and they hadnt taken Robert back for surgery yet, so I was able to be with him until then, which wasnt long. The nurses came in and added a patient ID to his Scooby Doo and he helped prep Scooby to go back to surgery. Just a few minutes after 9am the Doctor and his team came to the pre-op room to give Robert some medicine to relax him and take him back for surgery. My anxiety really kicked in while I watched them take my baby boy away. But I was able to keep it together for some odd reason, as if I knew it would be ok. We were out in the waiting room and as the time passed my husband and I decided that maybe my husband should run to the house and pack some lunch for us. Just about an hour after he left the surgeon walked in and asked if my husband was around so he could speak to the both of us. The first thing I asked was if everything was ok. When the surgeon smiled all of the anxiety I had been feeling immediately went away. He began by first telling me that everything went very smoothly, what a relief. Then he explained that what they had thought all of this time to be a diagnosis of CCAM turned out to be an extra lobe on his lung, so instead of 2 lobes he had 2 and a very small extra lobe. This meant that instead of cutting into his lung and possibly having to remove his lower lobe that they didnt even have to cut into the lung at all, they just had to cut off the extra piece that was on the side of his lung. Not long after the Surgeon was explaining things to me, my husband came in so he was able to explain everything to him as well. But because they did have to remove the piece from his lung, they did have to place a tube in his chest for drainage and he would have to go to the PICU for observation and care of the tube until the tube can be removed. About an hour after the surgeon left a nurse came in to take me back to see him in the recovery and assist with the transport to the PICU. I got in the recovery room and he looked so pitiful. He was on his stomach and he was holding his Scooby Doo doll, Scooby was allowed to go with him into the surgery. When he heard my voice he opened his eyes and looked up at me and said that he was ready to go home. Poor baby. I told him that we could not go home just yet and that he would have to  stay and let the nurses and the doctors fix him up so he could go home. He was ok with that answer. While we were transporting up to the PICU his oxygen level dropped and we had to hook up a tube that I would hold to his face to bring his O2 back up. Well, once the O2 level went back up he decided that Scooby needed some O2 and he then held the tube for Scooby. Once we got in the room in the PICU they explained that the tube he had on his chest was to hopefully keep him from getting pneumonia and fever. They also put him on a pain pump. Let the recovery process start! Not as easy as it would seem though. Yesterday was a whole lot harder than today has been. I cant stand to see my babies in pain and to see alarms going off because his O2 keeps dropping into the 70’s. Once we were able to get him to sleep, things went a little smoother. Through the night we had nurses in and out repositioning him, checking his IV’s and checking his vitals. But I am happy to say nothing serious happened last night. This morning he woke up talking, and the first thing he said was that he was hungry. He ate a pretty good sized breakfast and drank quite a bit of juice. Good start to what I know will be a good day!! The only things we have had to really worry about is he does not like the tube and we have been trying hard to get him to stop pulling on it as well as his IV’s. He is very antsy, which isnt a bad thing. I am glad that we are in recovery, but very tired. I cant wait to get this tube taken out so that he can move to the regular Pediatric floor and get through this and get home. 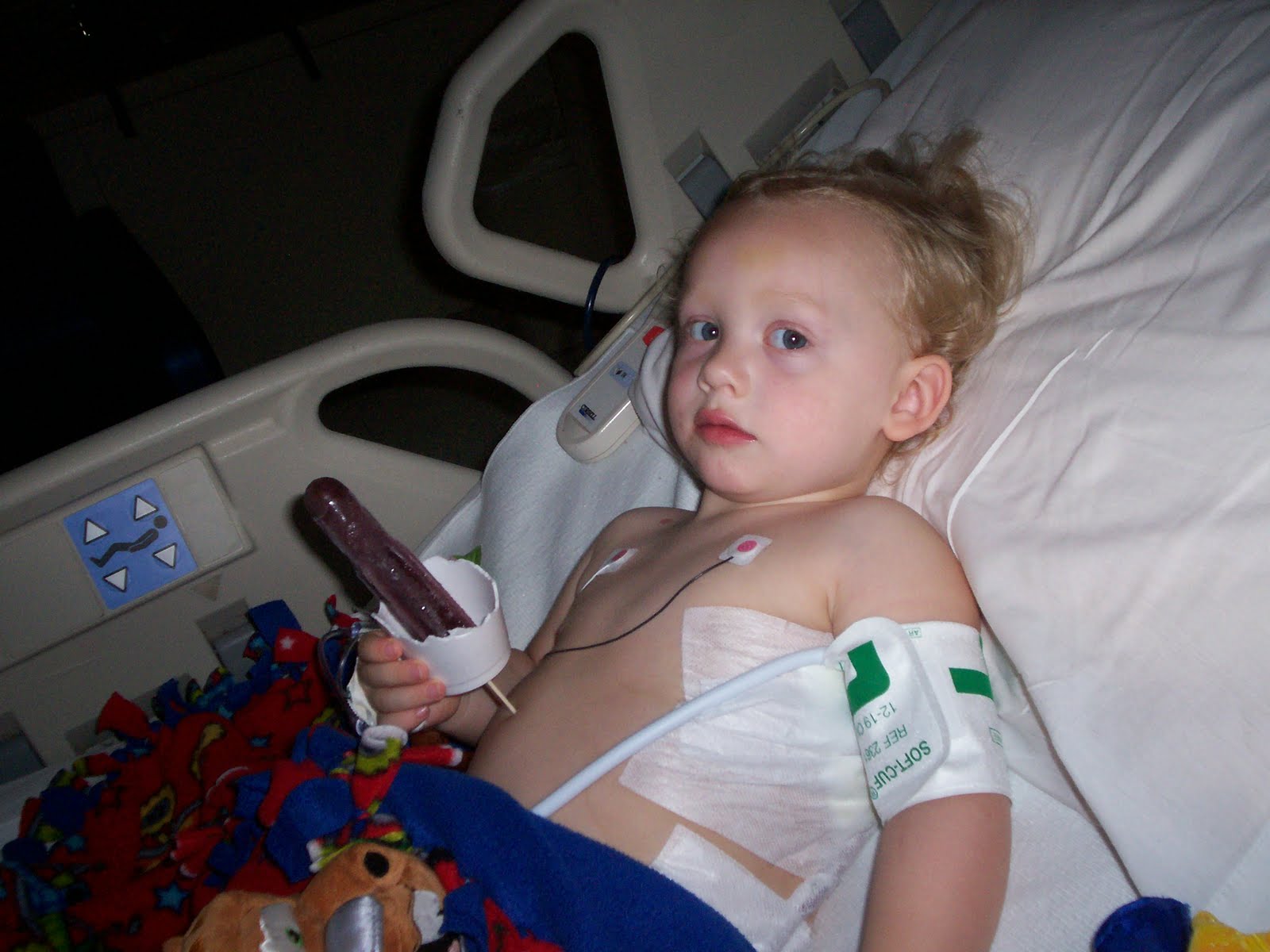