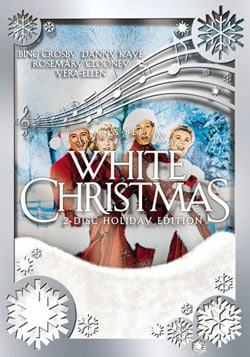 White Christmas is a treasury of Irving Berlin classics, among them “Count Your Blessings Instead of Sheep,” “Sisters,” “Mandy,” and the beloved holiday song, “White Christmas.” In this incredible 2-Disc Anniversary Edition, you will find the timeless musical, plus new special features that include backstage stories, a look at the actors and more!

Two talented song-and-dance men (Bing Crosby and Danny Kaye) team up after the war to become one of the hottest acts in show business. One winter, they join forces with a sister act (Rosemary Clooney and Vera-Ellen) and trek to Vermont for a White Christmas. Of course, there’s the requisite fun with the ladies, but the real adventure starts when Crosby & Kaye discover that the inn is run by their old army general who’s now in financial trouble. And the result is the stuff dreams are made of.
This is one of those holiday classic movies that my parents shared with me and I am happy to be able to share with my kids!

White Christmas stars Bing Crosby, Danny Kaye, Rosemary Clooney, and Vera-Ellen. It was written by Norman Krasna, Norman Panama and Melvin Frank and directed by Michael Curtiz. It was released on Blu-ray and DVD on November 2nd, 2010. It is not rated and runs 120 minutes.