I love chocolate and I love cooking with chocolate!! So when I was given some Hershey’s Cocoa to sample and review, I was excited to try some recipes out. Now through April 28th Hershey’s is having a contest.The contest celebrates 116 years of Hershey’s Cocoa and invites consumers to log onto HersheysKitchens.com to vote for one of 15 classic cocoa recipes including: Chocolate Thumb print Cookies, Hershey’s Cocoa Cream Pie, Hot Cocoa and Ultimate Chocolate Brownies. Each vote is good for a chance to win a grand prize trip to Hershey’s Kitchens to make the winning recipe with Hershey’s experts. Consumers can vote daily through April 28th. Since I was given 2 cans of the Hershey’s Cocoa, I decided to make a cake. Originally I had just decided to go with the Dark Chocolate Mousse. But after seeing the Hershey’s Especially Dark Chocolate Cake recipe, I decided that I would do something yummy with both! I made a chocolate mousse filled Dark Chocolate Cake! Read all the way through before starting and enjoy!!!

Here is the recipe for the Mousse:

Here is the Cake recipe:

Now to make the cake I made I added 1/2 cup of instant cappuccino mocha chocolate flavor to the mouse mix. You dont bake the Mousse into the cake. You put your cake mix in a round cake pan or I used a round oven safe bowl to bake it in. Before placing the cake in the oven I got a smaller oven safe round bowl and sprayed it with cooking spray so the cake would not stick. I placed the cake in the oven then after about 7 minutes I took the cake out then placed the small bowl that I sprayed in the middle, then continued with the baking. While the cake was baking I placed the mousse in the fridge to cool. Once the cake was done I had to let the cake cool down before adding the mousse. I then removed the small bowl and added the mousse. When the mousse was added, I got a plate and placed it on the bottom of the cake then flipped the cake to the plate. Once that was done I took off the bowl that the cake was baked in and frosted it. Then it was ready to serve!! As you can see it was not long before half the cake was gone!!!! 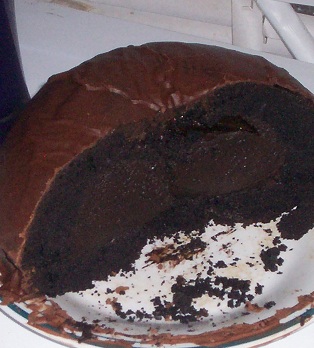