Since the first time I read The Chronicles Of Narnia: The Lion, The Witch and The Wardrobe as a kid, I have been in love with this fantasy series. When the first movie came out I knew that not only would I love it but I would also love to be able to share the books and the movies with my children in hopes they will share the same passion I did as a child for the series! From the first movie to this last one, I have been very pleased with the story and the way Narnia has been depicted from what was in the books. The Voyage of the Dawn Treader is just as exciting and fantastic as the first movie in this series. The adventures and action is all there along with the beauty of the fantasy world of Narnia and all of the mystical creatures that are from Narnia. The story is one that I cherished as a child and I love that my own children enjoy it as well. The new Chronicles of Narnia: The Voyage of the Dawn Treader is now available on DVD and Blu-ray so you can add it to your collection now just as I have!! 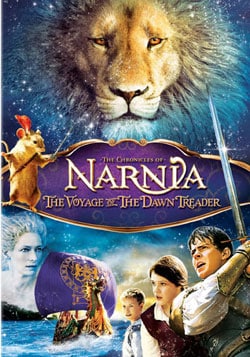 Precocious siblings Lucy (Georgie Henley, The Chronicles of Narniaseries) and Edmund Pevensie (Skandar Heynes, The Chronicles of Narnia series), along with their cousin Eustace (Will Poulter, Son of Rambow), are swallowed into a painting and transported back to Narnia. They join King Caspian (Ben Barnes, Dorian Gray) and a noble mouse named Reepicheep in a quest to rescue noble lords who had been lost fighting evil on another island. Aboard the magnificent shipThe Dawn Treader, the courageous voyagers travel to mysterious islands, confront mystical creatures, and reunite with the Great Lion Aslan on a mission that tests their characters to determine the fate of Narnia itself!

THE CHRONICLES OF NARNIA: THE VOYAGE OF THE DAWN TREADER(DVD 2-pk)

• The Chronicles of Narnia: The Voyage of The Dawn Treader in Standard   Definition

• The Chronicles of Narnia: The Voyage of The Dawn Treader in High   Definition

• “The Untold Adventures of The Dawn Treader” Animated Short

• King Caspian’s Guide to the Dawn Treader: Legends and Lore of the Great   Ship