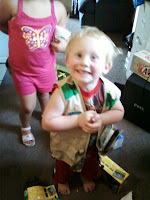 My little ones love playing outside and we love to go on adventures together. I love giving them a plot for a adventure then watch their little imaginations play it out. We had my sons birthday party and for his birthday we gave him the Backyard Safari Outfitters set that I had received for review. After the party was over and he was opening his toys up, he decided it was time to gear up. Once he was all geared up I went to the backyard with the kids then gave them the plot that our backyard was a African wonderland, and there was an adventure to be had. My kids loved the plot and immediately went with it. We all began to creep around the backyard looking for creatures that we could study. The first animals were our dogs and cats, which became ferocious beasts that the kids tamed to be their protectors while on safari. They climbed high up on the slide and looked through the spyglass across different backyards. Then back to the ground to look for bugs under the magnifying glass. We explored many portions of the yard and when they were ready to set up camp, we set up the base camp and put the camo net over the front part just so they could disguise the camp from wild animals. This was the first of many safaris since and many to come. My daughter loved the walking stick and pretends that she needs it to hike great distances. My son uses the little lantern that came with his base camp at night as a little night light that he can use in bed. My son also loves his vest and when its time to go on a safari, he gears up by connecting all of the little gear pieces to his vest. He also looks forward to adding more patches to the collection that he got with his set, to his vest. The Backyard Safari Outfitters gear is great for any little explorer. You can find the Backyard Safari Outfitters gear online or at your local Wal-Mart or Target stores!!!! 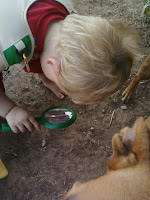 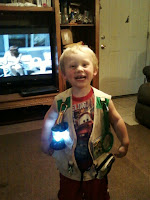