The Summer Is Heating Up With Television’s Hottest Secret Agents

Don’t miss your chance to own two of the sexiest, action-packed shows on television, when the USA Network’s top-rated shows BURN NOTICE Season 4 and WHITE COLLAR Season 2 come to DVD from Twentieth Century Fox Home Entertainment. Follow leading men Michael Westen (Jeffrey Donovan) and Neal Caffrey (Matt Bomer) as they bend the rules to enforce the law and learn all the tricks of the spy-trade with BURN NOTICE Season 4 and WHITE COLLAR Season 2 on DVD June 7.

Combining deadly thrills and intricate plot twists, the explosive Season Four of BURN NOTICE is the show’s hottest season yet! Master-spy Michael Westen is back, and this time, he’s joined by Jesse Porter, a no-nonsense counter-intelligence expert who has been burned himself. Along with go-to guy Sam and the dangerously sexy Fiona, the team takes on a barrage of outlaw biker gangs, drug dealers and a worldwide terrorist threat. As tension mounts, uneasy alliances are forged, friendships are tested, and a lethal game unfolds when Jesse vows to find and kill the one who burned him.

Compelling characters and thrilling plot twists make WHITE COLLAR one of television’s slickest, sexiest shows! Matt Bomer returns as sophisticated conman Neal Caffrey, who teams up with FBI Agent Peter Burke (Tim DeKay) to investigate an intriguing array of crimes ranging from extortion to murder. Now, reeling from the death of his girlfriend, Neal struggles to unlock the secret behind a mysterious music box and find Kate’s killer, even as his partnership with Peter begins to crumble. 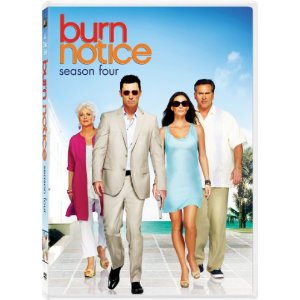 One lucky reader will win this awesome DVD set to give to dad this Fathers Day!!!

Mandatory Entry:
Tell me what you are doing for the dad in your life this Fathers Day! Please leave your email with this entry!!!

This giveaway is open to US residents. This giveaway will end at 11:59 pm on June 13,2011. Winner will be chosen at random.org and will be given 48 hours before another winner will be chosen. All products for reviews and giveaways are given as a sample from the companies. All opinions in reviews I conduct are my own. I was not paid to say anything or review any products.