I love Carolina Pad products and I also love animals. Well Carolina Pad is all for giving back and supporting non profit organizations and this time they have teamed up with one of my favorite organizations, the Humane Society of the United States. The Humane Society of the United States has played a role in my family for years. I know growing up that my parents were supporters of the Humane Society and their dogs then and now are all former orphans from the Humane Society. We have two boxers and even our babies were adopted! We also have 2 cats. but they were given to us. In all our animals are part of our family and are some of the sweetest animals I know. Our oldest is Chloe. She is a female boxer who is about 4 years old. When we adopted her she was very timid and scared. She had been severely abused by her previous owners. To look at her now you would not guess that prior to living with us, her life was not a life any creature should ever be subjected to. She was taken away from her previous owners in a police raid. She was found in a room full of horrible guys who had her cornered and were torturing her. She had been shot with BB guns and beaten. She did have a litter of puppies and the shelter did not have any info on what happened to them. We hope that if they were sold that they went to better homes. She was a very timid baby, and was scared to death of men. Except for my husband. We had seen her and fell in love. We asked to have time with her to see how she would react to us and our kids. At first she stood in the corner and just shook, but then my husband sat in the middle of the pin and called her over. She went to him, once she realized that we were not going to hurt her there was no doubt that she was to be ours. She still has her moments of timidness and she is terrified of anything that makes a loud noise or that resembles a gun, but for the most part she greets our friends and family with a wag of her stub of a tail and kisses. Then there is Harley. Harley is also a female boxer. She is very tiny for her breed and she is full of energy. She had come from a very loving family that had moved into a apartment. Harley loves to play and be outside, but when the family had moved they did not have a yard for her to play in and they hated keeping her in a kennel all day. So they did what they thought was best for her. When we saw her the first thing that got me was how small she was and the adorable under bite she has. The kids bonded right away and when she met Chloe it was like they were meant to be sisters!! Harley has chosen my daughter as hers and follows her everywhere and sleeps with her at night. Our cats were both given to us, one is Jesi and the other is Snickers. They are both around the same age and they sometimes believe that they are dogs. They play with the dogs and the kids and it is just way to cute. In all our animals are our family, I wouldnt have it any other way!! 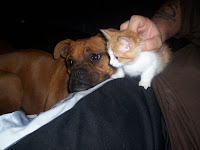 Harley and Jesi when she was a kitten

Like I had mentioned previously. Carolina Pad is partnering up to help support the Humane Society of the United States. In doing so they have created an amazing collection that is just for this purpose!!! The wonderful people over at Carolina Pad sent me the Stand Up! Collection and they would also like to send this same collection to one of my amazing readers!!! This collection includes a two pocket folder, one subject notebook, a personal book and a 1″ vinyl binder.

Mandatory Entry:
Tell me about your pet or a pet you have had. I dont care if its a dog, fish, spider, lizard, what ever that pet maybe, tell me about it!!!

This giveaway is open to US and Canada residents. This giveaway will end at 11:59 pm on June 30,2011. Winner will be chosen at random.org and will be given 48 hours before another winner will be chosen. All products for reviews and giveaways are given as a sample from the companies. All opinions in reviews I conduct are my own. I was not paid to say anything or review any products.