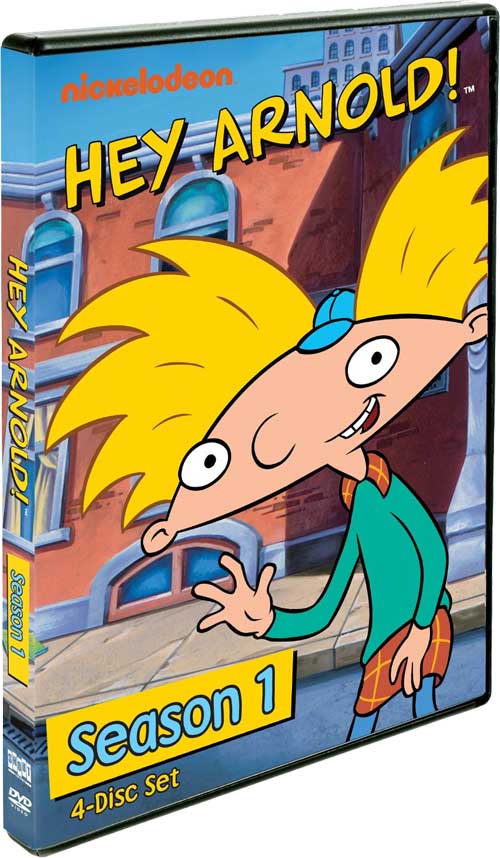 I remember when Hey Arnold first started to air on Nickelodeon. My sister was a Hey Arnold fan and would watch it all of the time on Nickelodeon. I was older but I still liked to watch cartoons with her at the time. That football shaped head kid always had an interesting view on life. From his senile grandfather to his friends, Arnold’s life was never a dull one!! Well for all of those Hey Arnold fans out there, Season 1 is now available on DVD!!
Featuring all 20 hilarious episodes, Hey Arnold!: Season One follows the adventures of Arnold, the original football-headed boy’slife in the big city alongside his Grandpa, Grandma, Abner the pig and a host of other friends and neighbors. Long anticipated by fans, Hey Arnold!: Season One has not been available in stores until now. The four-disc DVD set has a suggested retail price of $29.93.

A favorite with viewers and critics alike, Hey Arnold! stars Arnold, a fourth grader who lives with his grandparents Phil and Gertrude, owners of the Sunset Arms boarding house. Each episode finds Arnold in a new, sticky situation, whether it’s helping out a schoolmate with their problems or dealing with his own. Unfortunately, Arnold’s predicaments are often started by Helga, a schoolmate who picks on Arnold and constantly bullies him. However, Helga only pretends to dislike Arnold to hide the fact that she is secretly in love with him!