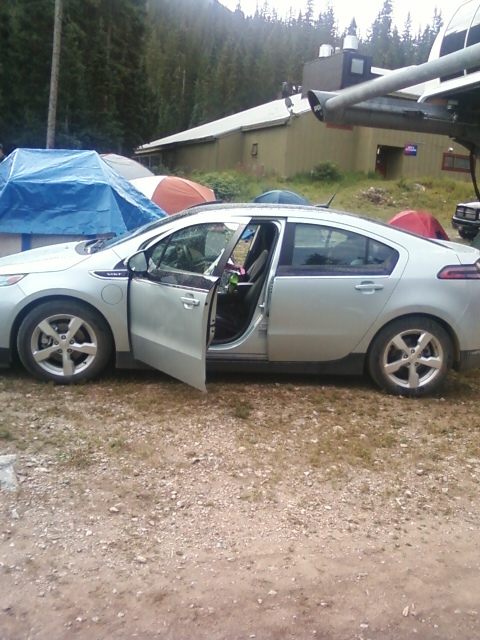 On Friday I was given a Chevy Volt to review for one week from GM! Let me tell you, our personal vehicle is a much older model SUV that guzzles that gas like it is going out of style. It is very sad, but it gets us from point a to point b. So when we received the Chevy Volt to review, we were ecstatic. The first thing that my husband and I thought was, we are going to save so much money this week!! Well on top of the Chevy review, this weekend also happened to be the Taos Mountain Music Festival, so what better way to test drive a vehicle than to take it out for a drive. From Amarillo to Taos, it takes about 5 hours. I know that if we had taken our truck we were looking at spending over $200 in gas. To Taos and back we only spent around $60. Huge difference. We even drove up into the mountains, which means up hill. Not only did we drive up to the Taos Mountain Ski Valley in the Chevy Volt, but we had our large cooler packed with food and drinks, a tent, sleeping bags, our duffle bag packed with clothing and toiletries, pillows, two kids, one in a car seat, and both my husband and I. With all of this loaded in the car, we made it up into the mountains, with the help of the OnStar that was activated for this review. On the way up we enjoyed the ride as well as the XM Radio, each of us taking turns picking music! We were noticing that people were looking at us, well I dont think it was so much us, more the car. When we would drive through towns we had people pointing, slowing down to look and see the car. Once we arrived in the ski valley, I went to check in and get our passes for the festival. I came back down to see police officers by the car with my husband. I was confused until I got to the car to find that the cops had pulled up to inquire about the car and wanted to know what we thought about it, lol. I found that very interesting, and since GM sent me a booklet of media information, I was able to answer their questions. I did not realize that we would get that kind of attention with this car. Little did I know. We drove up to the camp grounds to find quite a few people already there and setting up. When we drove up people stopped what they were doing, came out of their tents, with jaws dropping. We kinda felt like movie stars with the attention. As we were unloading we had people coming over asking us all about the car, wanting to know how it did up the mountain and how far we were able to drive in it. They were shocked to see that we were able to pack the car with so much and not only make it from Amarillo to Taos, but up to the ski valley. When we told them that we only used about $20 to get there they were in shock. They could not believe how quiet the car was, how much room it had and how sleek and sporty it looked. This was the perfect place to take this car. People were talking and everywhere we went during the festival we got looks and had people coming up to us. We drove down to the town of Taos to have lunch with my Aunt and Uncle at their cafe, Wired. This was on a Saturday and Taos was hopping, there were several festivals going on so there were tons of people around. We had people asking us about the car who were walking on the Plaza, people pulling up next to us asking us about it. Amazing, I loved that we were getting the attention. I think that is what a vehicle review should be. You test out the car as well as show it off and get looks, but this was way more than I had ever imagined and we have this car until Friday. I know since getting back to Amarillo we have had lots of looks. I have posted pictures of the car and we have had friends inquiring as well. We had friends call us and ask us to bring it by their houses just so they could see it in person. Tomorrow is the first day of school here, and we will be driving the car to drop the kids off and pick them up. I am interested to find out if we will get more inquiries. I think that it has helped people seeing a family in this car. They seem to be really impressed by the power it has, the room and the look. This is a perfect family vehicle. We are a family of four and my husband and I are not skinny. We rode very comfortably to Taos and back in this car. My sons car seat fits just like it would in any other car. I love the power this car has. This would be a car that would be perfect for us. With the gas prices and all, having one vehicle that we share for work, school and errands, this is the kind of car that is perfect for families!! So this week our goal is to use this car in our daily life routines and see just how much money we can save using nothing but the battery. Stay tuned for the next update and more information on the amazing Chevy Volt!!!

I was not paid to say anything in this review. All opinions are my own. I was provided a Chevy Volt to review, courtesy of GM, for one week.