The Amazingly Fun Farm in Amarillo was just like it says, amazingly fun!! This is the perfect place to take the kids this Halloween season. We took our three year old and one of his friends this year. The two had a blast. We spent two hours there, and every minute was very well spent!!! When we first arrived the boys wanted to check out some of the obstacle courses, the animals and the hay bail climbing tower. Then they were off to the giant hay slide, and they went on it over and over again. We had to get the boys away and promise we would do the slide again after we finished the rest of the fun farm activities. From the slide we were off to the pumpkin and corn cob cannons, where the shooter aimed at either pumpkins or signs in the field!! The boys thought that this was just way too cool. They loved shooting the corn cobs at the sign with the cow bells, trying to hit one of the bells, they also loved launching pumpkins and watching them explode!! After we had our turns at the cannons we went to the corn maze. I dont know if it was very smart of us, but we decided to let the boys lead us through the enormous corn maze. Even though we did get very lost, the boys loved it, they found it very fun, and I loved how much energy they were using, lol!! I think that after 45 minutes or so of being lost, it was time to find help so we could find our way out of the maze. Once we got out the boys ran back to the slide. We then decided to go and wait for the tractor to pick us up to go on the hay ride out to the pumpkin patch!!! This was Roberts first hay ride and he loved it and his friend loved it as well. We went around the corn maze and the the rest of the attractions, out to the pumpkin patch where you could pick out a pumpkin!! Once the hay ride was over, the boys insisted that they shoot some more corn cobs, which we did, then go one more time on the slide, which they did! By the time we got to the car, we had two very exhausted three year olds. We put them in the car, then as we were leaving the parking lot I looked in the back seat to find two asleep boys, mission accomplished on our part!!! The Amazingly Fun Farm was amazing and a great place to take your kids this Halloween season if you are in Amarillo or will be coming to Amarillo this season!!!! 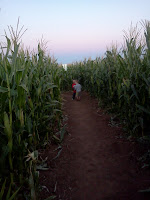 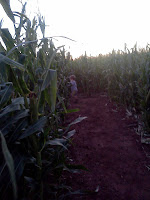 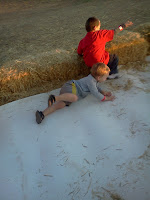 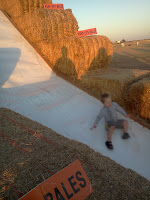 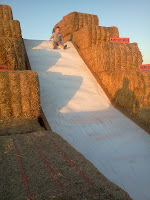