With kids you are bound to get little fevers here and there. I know that when a little one gets a fever, as a parent, it can be hard. You want your kids to be happy, healthy and comfortable, and a fever does not do any of that for your kids. I know that before Robert had his surgery, we were in and out of the hospital constantly. We saw a doctor at least twice a week. During that time I cant even try to guess how many fevers he had. He was constantly sick. If someone sneezed or coughed around him, he became very ill and it was hard. I know that the doctors knew what was going on when we would call. One of the first things that they would ask before giving us further instructions was, what is his temperature. Since Roberts condition was so fragile at the time, we had to be very accurate with his temperature when talking to the doctors. We went through many thermometers. I would have not thought about the accuracy if it had not been so crucial for Robert. We threw out many of those cheap thermometers because after the amount of use they would get, they would break, and become inaccurate. When Roberts temperature would spike, we would re check it with different thermometers, and when you get different readings from different thermometers, that can be very stressful. Especially when you have doctors asking you for readings. We were told that our best bet would be to get a Temporal Thermometer, but with all of the medical bills and financial issues, we thought that we just could not afford one. Recently I was sent a Exergen Temporal Scanner to review. I love this thermometer! It is very much like the ones that our doctor has and like the ones they use at the hospital. This thermometer is totally non-evasive, I can take my kids temperatures with out even waking them up! It takes a accurate measurement of temp with just a slide across the forehead! This amazing thermometer can be used on newborns, infants, children and even adults! Since I have had it I have decided that this nifty device should be a must have with families. Then when I realized how affordable it was, I could not believe why I did not get one sooner!!! After all the money we spent on the cheap thermometers, we could have bought several of these and we could have saved time as well with the doctors!! 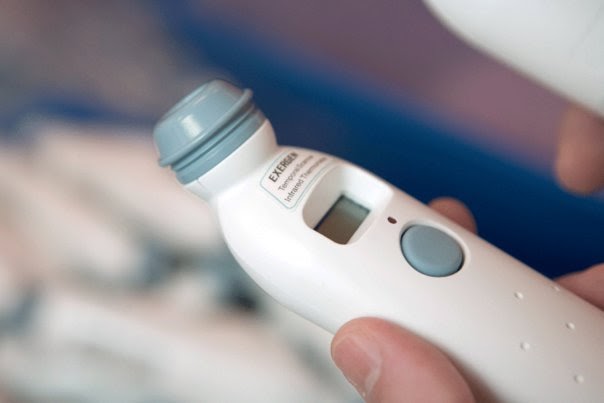 I was sent this product for review only. I was not paid to say anything my opinions are my own.