My son and all of his little friends love Thomas and Friends. Recently we were given the chance to have a Thomas and Friends Party that was sponsored by MommyParties and Mega Bloks! When the package arrived with all of the great party favors, I had to hide it from my son because I knew that he would just go nuts over it. I got some kids together and we planned on doing a Party. The day we chose, it snowed, so not everyone showed up, but we did have some kids that were ready to party so we went on with the party! We started out by handing out the great Mega Bloks Thomas and Friends Small Bucket with Thomas and the other bucket had Diesel!

Both of these sets were great for the kids. We had a set of little twins boys at the party and the boys automatically went with different characters, I thought that was kinda cute. My son loved sharing these toys with his little friends. Right after getting their party favors, the kids began opening their boxes and setting up. We put stickers on the parts that needed them and once everyone was all set, they were ready for some racing. And some more racing, then some more racing. During all of the racing down the tracks, I put on the new and very anticipated movie that my son was very excited to watch and share with his friends! I loved seeing all of the kids enjoying the product and the adults seemed to be having fun as well, helping some of the kids put together their sets and being referees for the races! We had some snacks and juice at the end of the party where we discussed what everyone thought of the Blok sets. The kids voiced how much they loved them and they loved watching the movie, which was a special treat. The movie was a new Thomas and Friends that has not been aired yet, and after learning that all of the kids were Thomas and Friends fans, and that they loved Thomas and Friends just as much as my son, it made the treat of the movie during the party even better! The adults also enjoyed the sets and were very impressed with both of the sets that the kids were given! I loved that after we were done, everyone was easily able to pick up their Bloks and pack them back in their boxes. And for the kids that did not make it because of the weather, we saved their boxes so they could have them when we saw them next. In all everyone has told me how much they loved the party and even the kids who did not make it, who still got a box after the party, loved the boxes and were very grateful!! 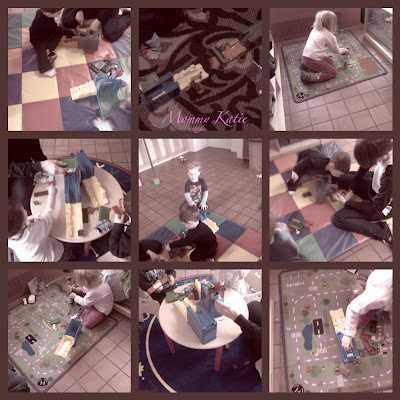 This party was sponsored by Mommy Parties and Mega Bloks, all of the party favors were provided by the company. I was not paid to say anything and all of the opinions are my own!