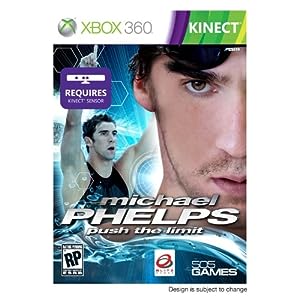 What better way to bring the family together than a great video game, where you can have everyone up and moving. This holiday season when you are looking for games to get for your XBOX Kinect system, then check out the Michael Phelps: Push the Limit! This great game is filled with tons of fun, great for playing over Christmas day after everyone has opened their presents and it is time for some family time!!!

For the first time ever, Michael Phelps: Push the Limit brings the fun, fitness and excitement of head-to-head swimming to your Kinect. With innovative, motion-controlled gameplay technology, you can turn your living room into a king-sized pool – big enough for the whole family or a bunch of friends! Splash into casual fun match-ups against friends and family, or dive deeper and immerse yourself in the world of competitive swimming in Career Mode, and climb through the ranks for a chance to take on one of the world’s greatest athletes: Michael Phelps, himself.

The Michael Phelps: Push the Limit demo features Xbox LIVE leader board functionality and players can swim in single player against the clock and two-player local multiplayer in the stunningly realized Perth Arena. When swimming against the clock, players’ final swimming times will be recorded to .000 of a second to ensure the utmost accuracy in record keeping and to stimulate massive levels of competition between international players on the global online leader boards. The leader boards are infinite and show players’ Gamertags, so that everyone can keep track of exactly which nation is the fastest in the pool.

Michael Phelps: Push the Limit is a first-of-its-kind swimming title designed to take full advantage of Kinect’s motion sensor technology. The game showcases all of the fun, fitness and excitement of head-to-head swimming. Gamers can have match-ups against friends and family, or dive into career mode, where players can immerse themselves in the world of competitive swimming and climb through the ranks for a chance to take on Michael Phelps himself.