I know that when I am driving down the road, I hate it when a rock gets thrown up onto my windshield, and in my case, causes yet another crack. I had a windshield that was fairly bad off. I had several cracks that started as little chips in the glass then spidered out into full windshield cracks. It seemed that last winter with the cold weather, my cracks spread and got bigger and bigger, not to mention that when my husband takes my Beast out hunting, he takes her four wheeling. With this winter weather here, I became concerned about what would happen to my windshield. Knowing that I saw the cracks spread last year, I was not about to wait around to see what this year would do. Well, recently I was able to do a review for Safelite. What a life saver! After setting up the appointment, I felt more at ease with heading into this winter season. I think that it is pretty bad when you have to drive, trying to look around cracks in my windshield. Or when it is frosty in the mornings, I find that I had to deal with the fact that it would be extra icy around the cracks and I have to keep them from fogging over and creating a worse driving condition for me. As I hope you can see in the picture below, my Beast’s windshield was pretty beat up. 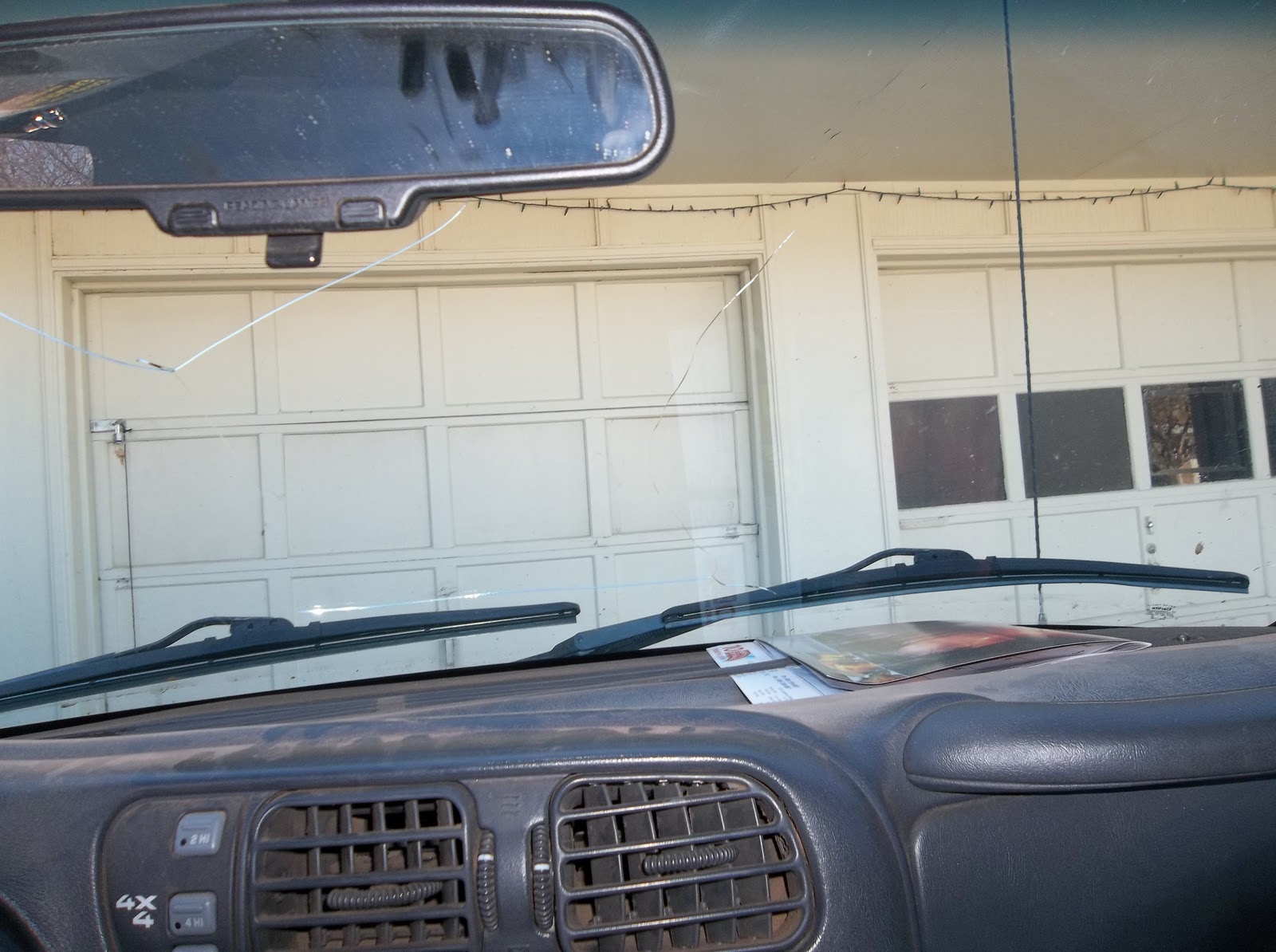 So when we set up the appointment for Safelite to come out, we had to set it up for a windshield replacement. Now I have had windshields replaced before, and at those times, I would have to drop my vehicle up then pick it up either several hours later, or the next day. I also never got to watch the whole thing being done. I found that Safelite not only makes your vehicle safer by making your view when driving clearer, but they also run checks on their technicians, and they send you a email with the picture of the technician who will be coming to fix your windshield or windows. I find that to be a huge plus, that way you dont have a stranger showing up at your door claiming to be with Safelite, you already know who to expect. Another great plus about the appointment is, they come to you. Which means, you dont have to drive around looking for a shop, then leaving your vehicle and hoping that they do a good job. They truly have their own shop on wheels. When the technician arrived, I was very glad to see how professional and knowledgeable he was. He also went right to work. Even though I was doing a review, he was very efficient and he was able to answer all of my questions while he was working. He also pointed out some really great things that I found to be very interesting. In fact I never had a auto glass repair guy ever tell me anything about what they did and why. Within a few minutes of his arrival, my beast was stripped of her badly cracked windshield. I was impressed on how easy he made it look to just pop that bad boy out. My husband was home when the technician came and he pointed out that before taking out the windshield he had taken off the plastic thing that is right above the hood, the thing that looks like a vent, I am not sure what it is called, but my husband said that he has never seen a auto glass repair man take that off. The tech explained that they do that so that they can primer the frame, which not all auto glass repair places do. In fact he showed me where the Beast had rust because the last time she had her windshield replaced, they had not primered it before putting in the new windshield.
The Beast with out her windshield! 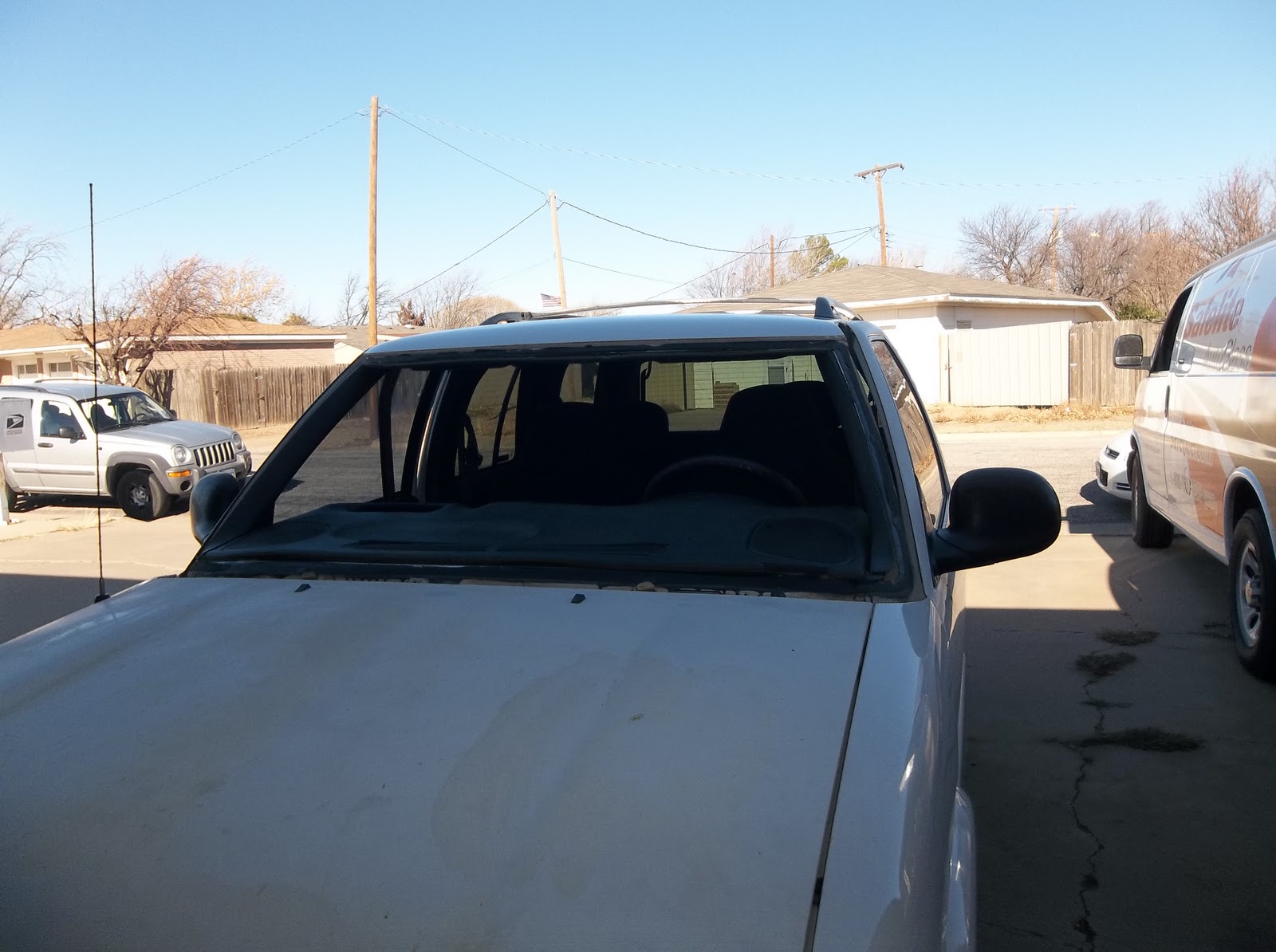 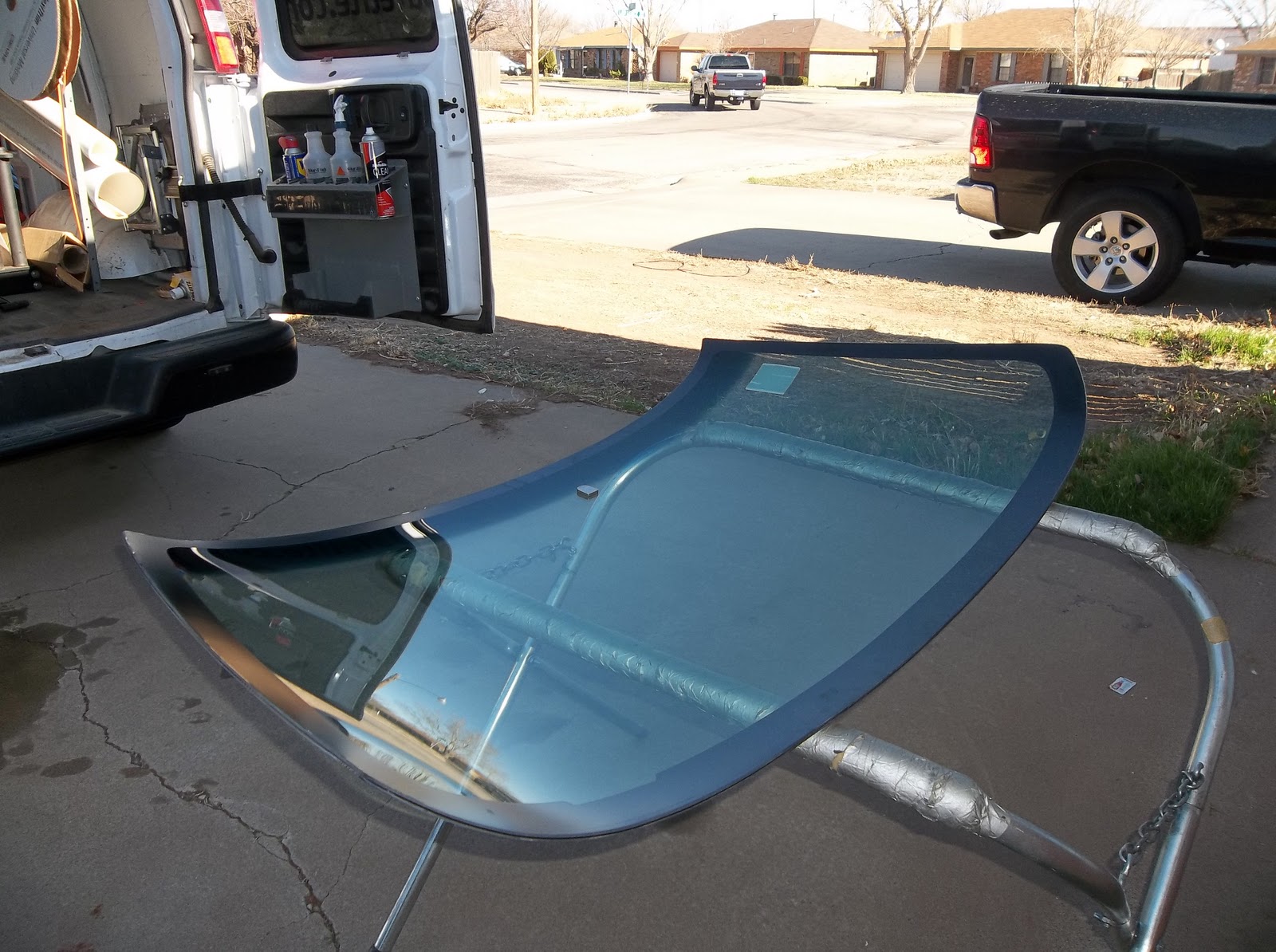 The next thing that I found to be very cool was, the Safelite Technician, brought out this tool box and pulled out the most curious looking device. He put one suction device on my driver side window, then the other suction cup looking device on my new windshield. After setting up, it was time for glue. He was very efficiant with this process as well, in fact I was very impressed in how easy he made it all look. Then it was time to get the glass with the tool he had put in place. This interesting looking tool has a arm that comes out. The tech then attached the windshield and the driver door devices and with this he was easily able to walk the windshield around the vehicle, without hurting his back, and put it into place with ease. This device is like having a extra hand when lifting the very heavy windshield. After putting the windshield in place, he removed the tool, then lined up the windshield to perfection! After the windshield was safely in place, he washed the windshield again, then replaced the plastic thingy and the wiper blades. To my surprise he was not done. He then cleaned my other windows. Now when Safelite services your vehicle they will also vacuum it for you, but with it being hunting season, I did not find it necessary to vacuum my Beast since my husband would be taking her out in a couple of days.

After it was all said and done, my Beast was ready for a closeup, at least closeup to her windshield, lol. The amazing technician from Safelite then went over some things with us on the care that we needed to take with her. He said to let her sit for one hour after the installation, not to slam the doors, leave the window open at least 1 inch for six hours, in order to avoid pressure on the seal and letting it set. Also we had to wait at least 24 hours before going through a high pressured wash with her. We were given some info on our new windshield as well as a warranty on the new windshield. I love how efficient the tech was and how detailed he was. He made it look so easy, but I know after watching him and learning about the process, it is not as easy as it looked. I am very satisfied with the work that Safelite did, and now when I drive, I know that I have a clear view through my windshield and I feel safer knowing this and knowing that it was replaced by professionals. 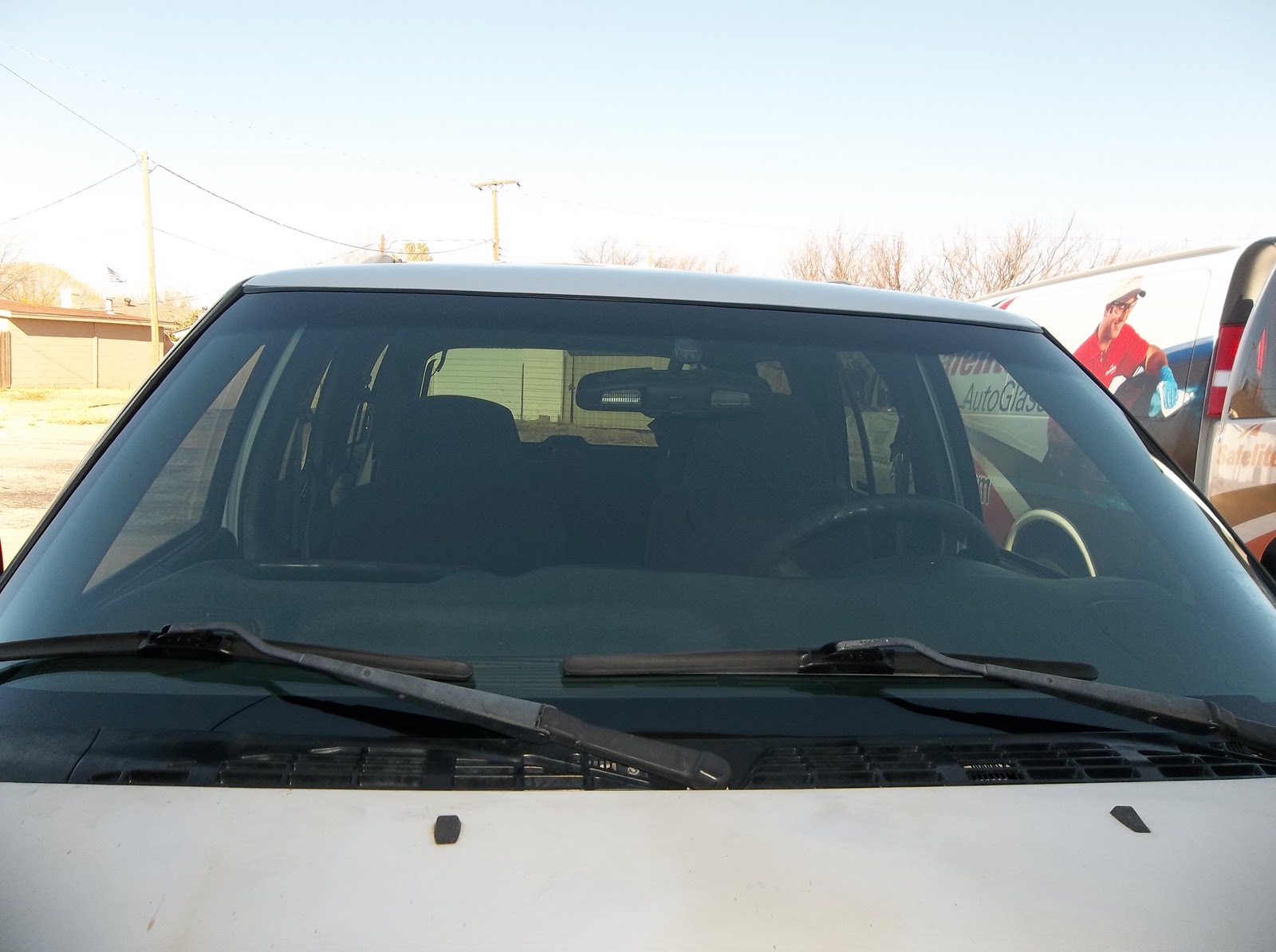 Not only was the replacement process the most efficient I had ever seen, since I had never seen one done, my husband told me that he was very impressed on the process as well, and he has actually watched it being done before. Safelite also makes the process of paying for your new windshield or even rock chip repair much easier. They will contact your insurance for you and get everything taken care of, so all you have to do is make the appointment and sit back knowing that the repair or replacement is being done by professionals. This winter season when you are going through your checklist on vehicle preparations, dont forget to add windshield repair to the list. Take it from me, if you have a chip in your windshield, all it takes is some cold weather conditions to make that chip turn into a full fledged ugly looking crack in your windshield.

I was given a new windshield replacement, courtesy of Safelite,  for this review. I was not paid to say anything, all opinions are my own.