Get Ready For Laughs in spring’s funniest fish-out-of-water comedy with heart starring everyone’s favorite tough guy (…in a tutu!)

The comedy with bite is back and funnier than ever, TOOTH FAIRY 2 arrives on Blu-ray and DVD March 6 from Twentieth Century Fox Home Entertainment. The one man comedy phenomenon Blue Collar Comedy Tour’s Larry the Cable Guy (Cars, Cars 2, and History Channel’s Only in America) sinks his teeth into this outrageous follow-up to the 2010 theatrical hit Tooth Fairy.

Larry Guthrie (Larry the Cable Guy) is a fun-loving dreamer with a serious mission: win back the love of his life before she makes a terrible mistake and marries the wrong man!  In his attempt to get back on his long lost love’s good side, Larry visits the school where she works and make’s a horrible mistake…  He accidentally tells a child that the Tooth Fairy is just a myth.  Crushing the child’s dreams sets off a chain of events that are far more than Larry bargained for including being  “sentenced” to become a Tooth Fairy or face  having his memories erased for good…PLUS losing any chance of getting back the girl of his dreams!  Larry is brought before a 500-year-old Tooth Fairy stuck in a 10-year-old girl’s body (played by newcomer Brady Reiter) for sentencing.  The Tooth Fairy demands that Larry make retribution by temporarily serving as a Tooth Fairy and proving that Tooth Fairies really do exist. His mission?  Larry must collect 20 teeth in 20 days. With his orders in hand, Larry embarks on a journey to prove the existence of Tooth Fairies and to win back the love of his life.

It’s tutu times the laughs watching Larry strut his stuff in pink tights and ballet shoes as he tries to prove he can git-r-done!

Filed with tons of heartwarming laughs for the entire family, the TOOTH FAIRY 2 Blu-ray and DVD includes five fun featurettes you and your family will not want to miss including the following:

Print off this cool maze for some great fun with the kids!! 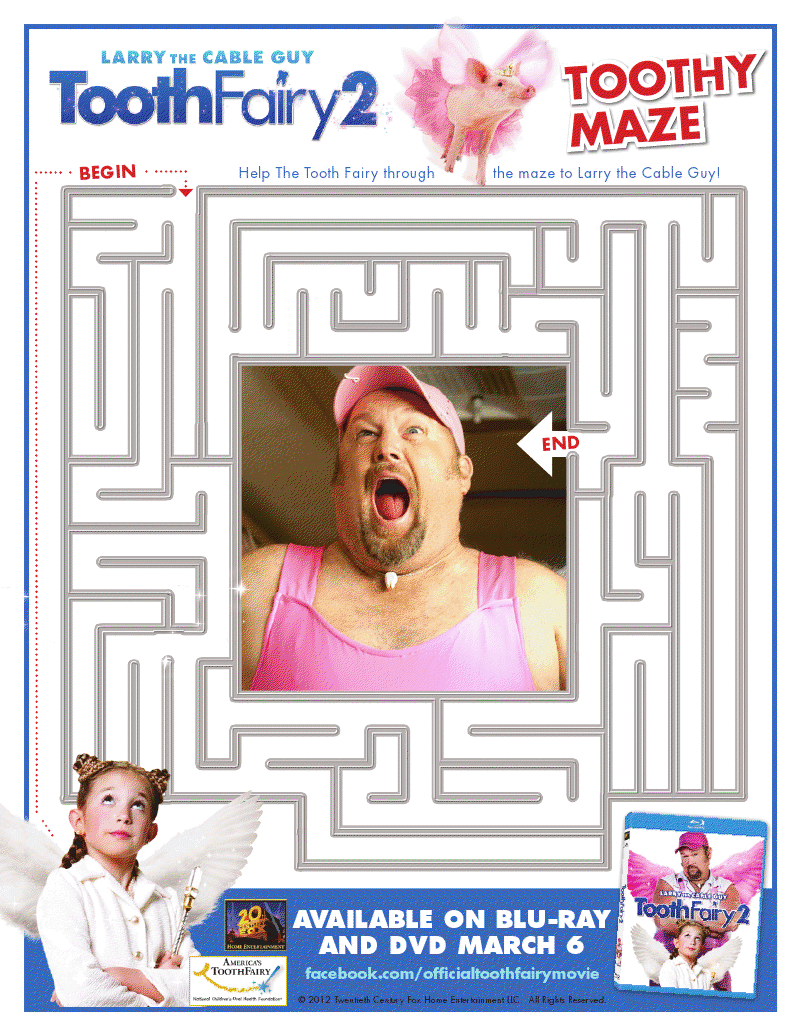