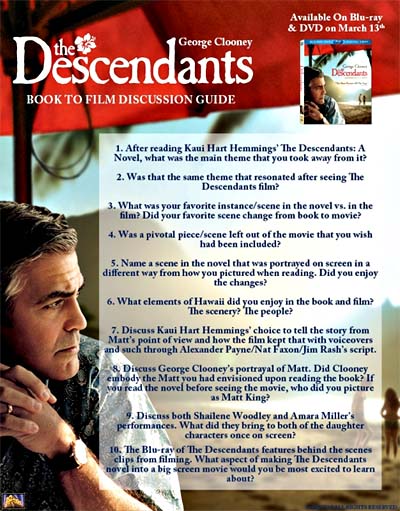 When
the matriarch of the King family passes away, Matt and his daughters
perform a beautiful Hawaiian ritual of scattering her ashes in the
ocean along with three leis. Here, we’ll showcase some other cultures
that have interesting death rituals, including sitting Shivah in
Judaism, and the burning of oil lamps in Hinduism.

Based
on the best-selling novel by Kaui Hart Hemmings and set in Hawaii,
THE
DESCENDANTS is
a sometimes humorous, sometimes tragic journey for Matt King (George
Clooney) an indifferent husband and father of two girls, who is
forced to re-examine his past and embrace his future when his wife
suffers a boating accident off of Waikiki. The event leads to a
rapprochement with his young daughters while Matt wrestles with a
decision to sell the family’s land handed down from Hawaiian
royalty and missionaries.

In
Theravada Buddhism, death is a time of transitioning to a yet another
rebirth. Given such, the living participate in acts that transfer
merit to the departed. For the living, ceremonies marking another’s
death are a reminder of life’s impermanence, which is a core aspect
of the Buddha’s teachings. Death rites are generally also the only
life cycle ritual that Theravada Buddhist monks get involved in,
which makes them of great importance. Some funeral customs include
“mataka-vastra-puja” (offering of cloth on behalf of the dead),
“mataka-bana” (preaching for the benefit of the dead), and
“mataka-dana” (offering in the name of the dead).

Death is
not seen as the final “end” in Hinduism; rather, it is a
turning point in the endless journey of the “atman” (or soul).
Because of this belief, Hinduism prohibits excessive mourning as it
may hinder the passage of the soul to its next destination. Hindu
mourning begins immediately after the body is cremated and last for
13 days. Immediately following the death, an oil lamp is lit near the
deceased and kept burning for three days. The immediate family of the
deceased is also prohibited from performing religious ceremonies,
visiting sacred places, and attending social functions. The family
must also bathe twice per day and eat simple meals. White is also the
color of mourning, and men will not cut their hair or shave and women
will not wash their hair for 10 days following the death. On the 13th
day, a Shraddha ceremony is performed, which is a fire sacrifice
wherein offerings are given to ancestors and to gods.

In
Islamic cultures, mourners observe a three-day grieving period. In
accordance with the Qur’an, widows observe an extended mourning
period called Iddah, which lasts for four months and ten days. During
Iddah, widows may not remarry, move from their home or wear anything
decorative. Weeping is allowed, but shrieking, wailing and causing
destruction are expressly forbidden as forms of grief in Islamic
cultures.

In
Judaism, there is a series of customs that allow mourners to re-enter
society. The first stage (and the most well known) is Shiva, and it
is the first seven days following the funeral. During Shiva (also
commonly referred to as “sitting Shiva”), people adjust their
behavior to express their grief. Customs include covering mirrors,
making small tears in clothing, and sitting low to the ground when
receiving condolences. The second stage is called Shloshim, which is
the 30 days following the funeral. During Shloshim, mourners are
prohibited from getting married or attending celebrations, and men
refrain from shaving and cutting their hair.