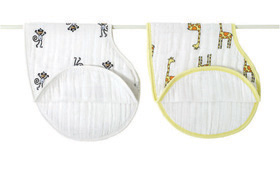 WHO:            aden + anais®, the baby care brand known for its award-winning collection of stylishly functional products made from 100% breathable cotton muslin, announces that its burpy bib® has won top honors as the Most Absorbent Infant Bib in the Nursery category for the 2012 Cribsie Awards, the online awards for the best-of-the-best in baby and tot products chosen by the general public.

WHAT:            A Cribsie Award-winning product, babies (and parents!) drool over aden +anais’® signature burpy bibs®.  Boasting four layers of muslin, chic original prints and colorful piping, these ultra-absorbent bibs are tough enough to take on the messiest of eaters, while soft enough to clean baby’s delicate skin.  Uniquely shaped, burpy bibs® double as an over-the-shoulder burp cloth. $22.00 for a pack of two.