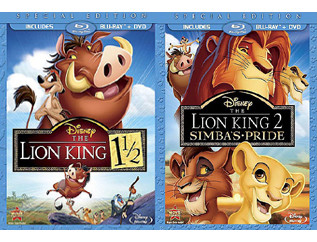 In The Lion King 1.5, you have Simba’s somewhat crazy friends Timon and Pumbaa telling their story of where they are from and what brought them together. They also tell their side of the story on how they helped Simba out and helped him save the Serengeti! I love Timon and his gassy best friend Pumbaa and The Lion King 1.5 makes a great addition to any Lion King lovers collection along with The Lion King 2!! The Lion King 1.5 on Blu-Ray 2 disc set you get the Blu-Ray and DVD copy to share and enjoy with your kids!

Deleted Scenes
Director Bradley Raymond and Producer George Mendoza explain why these segments did not make the final film.


Timon: Behind the Legend
Hosted by Peter Graves, this mock-umentary traces Timon’s childhood. There are interviews with Timon’s mom, Uncle Max  & Pumbaa, plus snapshots show him growing up.

Before the Beginning: The Making of Lion King 1 1?2
Director Bradley Raymond and Producer George Mendoza walk viewers through the film… from before the beginning.  Brad  and George are silhouetted against their own film with a remote, just like Timon and Pumbaa.

“Grazing in the Grass”
Music video performed by Raven.

Then in The Lion King 2, you have the beloved friends Simba, Nala, Timon and Pumbaa who are back and now going through the circle of life by trying to lead Simba and Nala’s daughter Kiara in the right direction. Like her father and mother, she too is a very curious little one who ventures further away than she is allowed. She ends up coming face to face with the future king of her feared and evil uncle Scar’s pride, Kovu. She and Kovu are about the same age and find themselves in a challenge to bring the two prides together. All while Timon and Pumbaa are trying to keep Kiara safe.

“One By One”
An original animated short with vocals by The Lion King vocalist Lebo Morake.

Timon & Pumbaa: Find Out Why
In this series of animated shorts, Timon and Pumbaa provide answers to some of life’s most puzzling questions including:


Proud of Simba’s Pride
A featurette that traces the making of the movie.