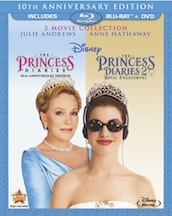 I can not believe that it has been 10 years since the Princess Diaries first debuted, but it is true. To celebrate the 10th anniversary, Disney has released the Princess Diaries set for the first time on Blu-Ray! In this set you get both of the modern day fairy tales, the perfect set for a princess kind of afternoon for you and your girls!!  In this blu-ray set, you get 3 blu-rays to enjoy. In the first one, you follow Mia, a teenage girl living that awkward teen life, that abruptly gets disturbed when she finds out that she is a real princess. Some girls would be excited to be a real princess and be swooned over by many, but Mia is not like most girls, and the whole princess thing is just not her thing, or so she thinks. In the second disk, you have the Princess Diaries 2, where Mia is back and its like you pick up right where the first one left off. Mia has always dreamed of finding her true love, but at 16 she never thought that she would have to find love and marry!!! This becomes a reality that is just too much for her to comprehend, but if she doesnt marry, her family could loose the crown. So it is all up to Mia to find love, and marry in order to keep her families crown!!! I love Julie Andrews and in both of the Princess Diaries movies, she stars as Mia’s grandmother, who is queen of Genovia. On top of the two great movies that you and your girls will love to share, you also get the bonus features which are fun to watch as well. In the bonus features in this set, you get the great out takes and bloopers, 8 deleted scenes, a personality quiz where you can find your inner princess as well as much more!!! The Princess Diaries 10th Anniversary Blu-Ray combo pack is available now to bring home from Target!!