I love preparing for a new baby. There is so much to do and prepare for. I love to personalize with my babies. From the blankets and clothing to their rooms. Since we are expecting another little boy to join our family, we have decided that Robert will share his room with his brother Wyatt. With that said there is so much to do to get the room ready for Wyatt. Now I have to admit, we are getting close and I have not started on the room. I have gotten the items needed for the room so we can set it up, but as far as setting up, I have not started down that road. Since the boys will be sharing a room, we are going to put their beds on either side of the room so that they can each have their own space. And like with Robert, we will have Wyatt’s name above his bed. We chose the name Wyatt, and when I think of that name I think of the old west. I think of cowboys and my son Robert does as well, in fact he has decided that Wyatt will be Wyatt Earp, lol. So with the theme of Wyatt’s side of the room we will be going with a old west theme. Since I love to personalize with our kids, I was very excited to find a company that could customize Wyatt’s name with the old western theme put into the way the lettering is made! I was sent a set of letters that say Wyatt and a very awesome Vine Monogram, that is going to be great for the boys room that has the letters R & W on it, for Robert and Wyatt! These awesome letters are just amazing and more than exceeded my expectations, especially with the monogram, and they came from Woodenletters.net! At Woodenletters.net you can pick the style of lettering you want, then you can choose the size, color and even theme! I chose the unfinished letters so that once we chose the bedding for his crib, we can coordinate the colors for the lettering! You can choose letters for names or sayings, so that you can personalize any space! So if you are looking for personalized lettering for a new babies room, your room or if you are wanting to get some personalized lettering for sayings, then check out Woodenletters.net!!! 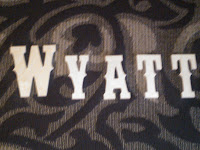 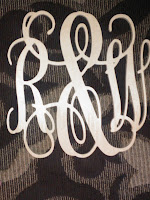