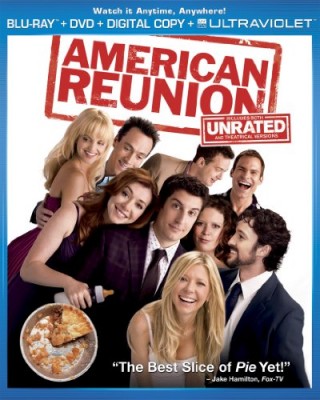 That cast of the awkward but familiar friends are back and ready to update us on their crazy lives. I can remember when American Pie first came out and we all gasped and laughed at the oh so awkward and crazy lives of the teens as they showed us the moments that some of us may even relate to but may never admit to, lol. Then you had the follow ups, from band camp to college then to the big wedding, all moments and milestones in life that most of us can relate to, but put in your face once again with the so called naked truth of how it went down for them. Well in the newest addition to the American Pie movies we have those crazy friends back once again, all grown up and leading living their own lives, but showing the once again raw facts of what life is really like for them, lol. They all get together and are reunited for a high school reunion, and even though they have grown and are leading different lives, when this group of friends are all together at any point in their lives, you know that the chaos and unpleasant awkward realities all surface once again!! This was a movie that made for a great comedy to watch with the hubby. Knowing that this movie is part of the American Pie series of movies, we knew right away that this would be one for us to watch with out the kids!! My husband and I both loved American Reunion and it made for a great movie to add to a evening full of laughs!! So if you are looking for that perfect comedy to watch by yourself, with some friends or with the hubby, then get American Reunion today!!!!!

Based on Characters Created By: Adam Herz