My son is a huge collector of toy cars and on top of his passion for toy vehicles he also adores dinosaurs. Like most little boys out there who have a thing for collecting toy cars, he has a great collection of Hot Wheels that seems to constantly grow. He has been collecting Hot Wheels since he was a toddler, which is not recommended, but he loves his cars and he has adored his collection and added to it ever since. Recently he was sent two new Hot Wheels to add to his collection from Team Hot Wheels! He found the Prototype H-24 and the Lotus Concept to be great additions to his collection of Hot Wheels cars! Both of these awesome cars are designed for speed and were ready to race as soon as he took them out of the packages!! With my son, and many other boys out there, he loves going on the Hot Wheels website and going through the collection so that he can mark the ones he has down and add more of the ones he wants to his wish list!!! 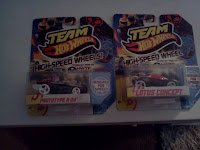 On top of his passion for Hot Wheels, my son also loves the vehicles and play sets from Matchbox! Like I had said before and many times in the past, my son loves dinosaurs. He has been a dinosaur fanatic for about the same amount of time that he has been a collector of cars. So over the past couple of years we have fed that hunger of him wanting to learn and collect anything dinosaur. Well to feed his hunger for awesome dinosaur products we were sent the Big Boots Dino Chopper from Matchbox to review. This awesome chopper comes with some Big Boots Skydivers who are ready to drop from the helicopter into the action! Your little man can pull the trigger and watch his Big Boots guys leap from the cabin and land on their big boots feet, then when they are ready to come back up, he just spins the propeller! These Big Boots guys are ready to look for dinosaurs and maybe even battle with some! The Big Boots Dino Chopper is amazing and has made for a great adventure toy for my son to enjoy for hours of fun and adventure!!! 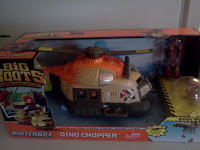 In all when it comes to finding great toys for your boys, I have found that the products from both Hot Wheels and Matchbox to always be a hit in my house and with my sons friends as well, and these new toys that we were sent are just as awesome as the others that we have added to his collections of Matchbox and Hot Wheels!!!