Like many other little boys out there, Robert is a little boy that loves the creepy crawlies. He finds them to be fascinating, as long as they are not crawling on him, lol. To feed his fascination, we have a subscription to National Geographic Kids, which teaches him about all types of creatures, from the creepy crawly ones to the cute and fuzzy ones! When it comes to getting toys for Robert, he loves the toys that mimic creatures or his favorite characters. He loves the scientific toys, where he can learn from the toys and have fun all at the same time. One company that offers toys that feed both of my kids fascination with science is Uncle Milton Toys, and when we were told about their new Nat Geo Wild line of toys for kids that were going to be put out by Uncle Milton Toys, we were very curious to see what they had in store. Well the wonderful people from Uncle Milton Toys sent us the Curl and Coil Snake Light from the Nat Geo Wild line of products. This realistic looking snake light that was made to look like the Eastern Green Mamba Snake is a product that is right up my little Robert’s alley when it comes to the line of creepy crawly products that he adores. Not only did he enjoy looking up information and learning about the snake that his light was made after, but he also enjoys having the light that not only has a light in the mouth that he can use as a flash light, but has eyes that light up as well. He found that being able to coil his snake light around his arm to not only be very handy, but to also be cool when showing off his new light to his friends! I think that another feature that stood out for Robert and his friends is that this flash light has fangs, and to little boys, that is just way too cool! In all, the Curl and Coil Snake Light from the Nat Geo Wild line at Uncle Milton Toys has been a hit, not only for my son and the cool aspects behind this light but also for his friends as well!! 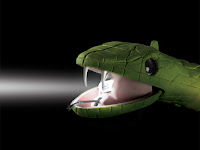