Sorry I have not updated sooner, but with Wyatt here and me trying to get back into the swing of things, it has been a bit hectic around here. So here we go. Little Wyatt Michael Sexton was born on Tuesday September 4 at 12:22pm. He weighed in at 8lbs 10oz and was 21 inches long. For me, he is the biggest baby I have had. My other two were each 6lbs 13oz, so Wyatt is my whopper, lol. Well we were hoping to go in for the induction on Sunday, but since it was the holiday weekend, the Dr wanted to wait until Monday at 7pm to start. Now I had been on complete bed rest in the dark for the past month and a half then for the past three months, I was on plain ole bed rest due to going into premature labor. It seems that after they stopped the labor a few months ago, I still had contractions on a regular basis, but they were not strong enough to do anything. Then my blood pressure started to shoot way up and after all of the negative results coming back for preeclampsia, I was sentenced to complete bed rest in the dark, boo. I started to go back into labor a couple of weeks before the induction, so we were very hopeful, but then Wyatt decided to turn breach on us so we did not want him to come until he flipped back around. Once he flipped back a couple of days later, the labor started to increase, and I was dilating, but Wyatt’s head was just not going down, so…. we had to once again rely on a induction. Come last Monday, I was a wreck, I was swollen like never before, I hurt everywhere and I was as huge as a house, or that is the way it felt, but 7pm just could not get here soon enough, the day went by so slowly. Once 6pm came around we went and packed up everything we were taking to the hospital, picked up my sister in law to stay with the kids and headed to the hospital. They started me off with some cervidill, which helps soften the cervix. I went in anticipating another quick and drug free labor like I had with Robert, this was so not the route we went this time. I cramped all through the night, and because of my blood pressure they had to monitor me closely, which meant that they took my vitals every 30 minutes, so I did not sleep that night. On the plus side I got to try out this new wireless contraction tracing device that was cool because it tracked baby and contractions even when I moved and I could get up and not have to reset anything. Come morning at 7 am they took out the cervidill and started me on a pitocin drip via IV. The Dr was going to come in later in the day to break my water, so in the meantime my contractions started to get a lot stronger but Wyatt’s little head was still not in the pelvis. So, the nurse decided to put me on my side and put my leg up over the other, which worked like a charm because with in a few minutes I went from a 4 to a 7 and my water broke as well. Knowing my history with my previous labor with Robert the nurses had to get into full swing to deliver my Wyatt. The Dr rushed down to our room and at that time my pain was more than I had remembered it being with Robert, plus I was going on no sleep, so I went for the epidural. My husband had wanted to deliver Wyatt just like he did Robert, but right after the epidural went in I was fully dilated and ready to go. 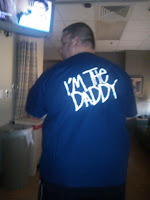 Wyatt then went into distress and my oxygen levels went down as well, so my husband was not able to deliver our Wyatt, which was ok with him since he could see that there was a problem. It turned out that little Wyatt had gotten stuck in my pelvis. His shoulders were too broad and were not going to fit through. The Dr said that we were going to have to do a emergence C Section if I could not get him out soon. Well, I took all I had and bared down and pushed that little boy out. He ended up having a bowel movement on his way out so they had to suction him right away. But once I heard that first cry, I knew that he was going to be ok. I honestly can not remember being in so much pain, and I dont think that the epidural did too much for me either other than making my butt numb and also leaving me with back pain that I am still having a issue from where they put the epidural in at. But, with the end result being a very adorable baby boy, I will deal with the after math! So now that you know the story, meet our Wyatt Michael Sexton!!! 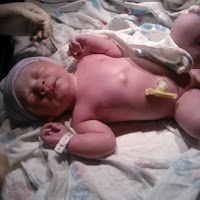 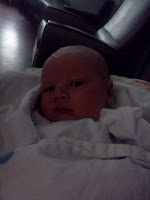