Halloween is creeping up on us, and before we know it, it will be here and it will be time to get the kids dressed and head out for a night of tricks and treats! This year my kids decided that they wanted to team up and do a theme together. My kids both love Star Wars, I think Robert even more so, so this year the kids decided that they would go as characters from Star Wars. Robert is the one who came up with the idea, and when he asked his sister if she would go along and dress as a Star Wars character this year, she was very excited to oblige him. Now, I had thought that with my daughter being as girly she is, that she would naturally go as Princess Leia or as any of the other beautiful ladies in the Star Wars crew, but no, she went on the AnytimeCostumes.com website and right away decided that she wanted to be a Jawa. I myself, did not know what a Jawa was, even though I grew up watching the Star Wars movies. But both of my kids knew what a Jawa was and were very eager to tell me all about them. The Jawas are desert droid dealers, and they are these creatures that wear hooded robes and have glowing eyes. They are scavenger, humanoid creatures and they live in the deserts of Tatooine. So not only did my daughter find the costume she wanted for this year, but I also learned a little about a creature that I did not know a whole lot about from the Star Wars movies. This year, not only will the kids go as the characters they chose from the Star Wars movies, but we also had the chance to review the Jawa costume from AnytimeCostumes.com!! I love that we are able to find the costumes that the kids want, but also get them at great prices and find the accessories that go along with their costumes as well! So this year when you are on the hunt for the perfect costume, or if your family has a theme in mind, then head on over to AnytimeCostumes.com!!! 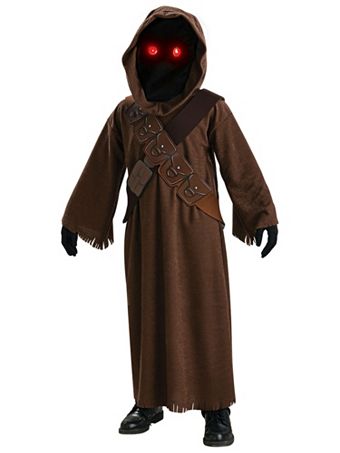