When I was pregnant, like many other pregnant moms out there, I had to make the choice on how I would be feeding my little Wyatt once he got here. The choice for me was a easy one, I chose to breastfeed. We all know that breastfeeding is the best way to go for baby in the first year of life and knowing all of the benefits of breastfeeding for Wyatt, the choice was one that I did not have to think about. I breastfed my older two as well when they were babies and I knew that I would be doing the same with Wyatt. But, like they say with every pregnancy, I have come to believe even after pregnancy, that they are not the same and things even after pregnancy are not always the same like they were with previous babies. After having Wyatt, I went right into breastfeeding, but I noticed that I was not producing as much milk as I had with my other two babies. The latch was good and he was feeding for a fair amount of time per side, but when I would go to pump in between feedings, I noticed that my milk production was no where near what it was before. I did become concerned that Wyatt was not getting what he was needing, so I started asking questions and looking into the products that are out there that can help a woman produce more milk. That is when I came across the nursing line of products from Fairhaven Health. I had heard about Fenugreek, which is a herbal supplement that has been shown to increase milk production in nursing women and that is how I came across Fairhaven Health. When I went to look at the products from Fairhaven Health, I saw that they had Fenugreek, but I also saw that they had a whole line of products that are targeted at the breastfeeding mom to make the journey of breastfeeding a smooth one for both mom and baby. So when I was sent the entire set of products for a nursing mom to review from Fairhaven Health, I became more at ease and also excited to get the help I needed to make my breastfeeding journey the one I had imagined it to be. After using the Fenugreek for a week, I started noticing a big difference in my milk production. Then came my issue with sore nipples. I know that even though I have breastfed my babies in the past, I still have issues with sore nipples and the Nipple Nurture Balm from Fairhaven Health is a balm that not only soothes sore nipples but is also safe for both mom and baby. Then with the Nursing Time Tea, I found that it also helps increase the milk production and also improves the milk supply overall! Now in the past, I have known that taking daily vitamins is important when breastfeeding, just like when a woman is pregnant, and since baby is still relying on mom to provide the nutrients that they need to grow healthy, taking daily vitamins will help keep mom and baby healthy while breastfeeding! That said I love that on top of the Fenugreek, the tea mix and the nipple balm, I was sent a Nursing Blend Breastfeeding Supplement, which also boosts the milk supply and I was sent a Nursing Postnatal Breastfeeding Multivitamin, which contains the right amounts of vitamins and minerals that help keep both mom and baby healthy. In all, the products that I was sent from Fairhaven Health have shown to improve my milk supply, which was my initial goal, and have made my breastfeeding journey with Wyatt the one I had imagined! 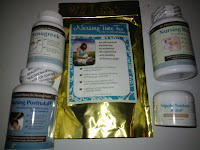