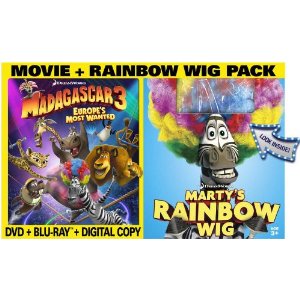 Those kooky friends from Madagascar are back and ready to entertain your family again in a all new adventure!! We were sent Madagascar 3: Europe’s Most Wanted to review and add to our family movie night! Along with the Blu-Ray that we were sent, my kids loved the bonus rainbow wig that came with the movie. Now that my kids have the official Afro Wig, they take turns going around singing “Afro circus, Afro circus, Afro polka dot polka dot” and so on, lol. They love being able to watch Madagascar 3 over and over again. With the new movie, you have the friends who are ready to go back home, to New York, and they find themselves joining a traveling circus in Europe in hopes of making it home! And with the Blu-Ray combo pack you not only get the movie like you saw in the theater, but you also get all of the great bonus features as well! Madagascar 3: Europe’s Most Wanted is now available to bring home and share with your family!

Blu-ray bonus features:
Get Them To The Train—It’s time to pack up the circus and get to the next gig! But before the gang can leave, Alex must find all of the members of the crew so no one is left behind.
The Animators’ Corner—A blend of storyboards, commentary and exclusive interviews with the filmmakers, animators and voice talent.
Trivia Track—Pop up trivia that can be activated during the feature film.
Big Top Cast—An inside look at the whole gang back for the third installment of Madagascar, plus the many new faces that have joined the show! Through interviews with the cast and filmmakers on all three films, explore the design evolution of the zoosters and learn the ins and outs of what has made them such entertaining characters.
Deleted Scenes—Three deleted scenes with introductions from the directors.
Mad Music Mash-Up—Polka Dot Move It video.
Ringmasters—Follow the three directors through an entire work day for a complete inside look at the daily creation process on an animated film. See story pitches, dailies sessions, scratch dialogue recording and many other candid moments from a single day in production.
Madagascar 3 Roundtable—Stars Ben Stiller, Chris Rock, David Schwimmer and Jada Pinkett Smith discuss the Madagascar franchise and the newest installment.
Filmmakers’ Commentary—With directors Eric Darnell, Tom McGrath and Conrad Vernon.
Previews
DVD bonus features:
Big Top Cast
Deleted Scenes
Mad Music Mash-Up
Circus Acts (DVD-ROM)—Printables and more.
Filmmakers’ Commentary
Previews