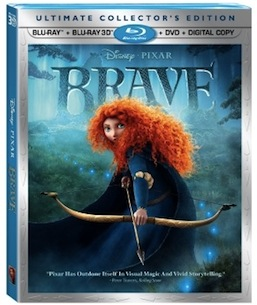 This week is the week of Thanksgiving, and after today in my house, the kids are off for the rest of the week. I love having my kids home, but keeping them occupied the entire time when I am cleaning and cooking, can be a task. I do enjoy having the kids in the kitchen helping, but there are some things that they can not help with, so this week we are cooking, playing games, making some great decorations for Thursday and watching some new movies. One of the movies that we got, and have already watched, and have on the list for this week to watch again while the pies are baking is, Brave! When the new Disney movie Brave came in, I could not unwrap it fast enough for the kids, and once we watched it, I could see why they were so excited to watch it. The movie takes place in Scotland and it takes you into a time long ago, where myths and legends lived, and where stories began. I love that like many other Disney movies, there is a great story and lesson, like dont take those you love for granted. My daughter is not quite a teenager yet, but I know that those years are just around the corner, and we both loved that in Brave, the main character is a young teenage girl. Like many of the other Disney movies for girls, this one is about a princess named Merida. She finds herself in a spot where she is still a little girl who is full of energy and loves a challenge and is a tomboy at heart, but where in her time, is old enough to be married. This is where mother and daughter bump heads and find themselves on a path that neither one of them had even imagined taking. You also have the three little brothers who are always finding themselves in some kind of mischief together, and you have Merida’s dad the king, who is all about telling his own tales of fighting a great big bear and being the mighty king that he sees himself as. I loved this movie and my kids did as well. So, if you are looking for a great movie to share with the kids this week while you are preparing your Thanksgiving meal or for a great family movie night movie, then you are going to want to check out Disney’s Brave!!