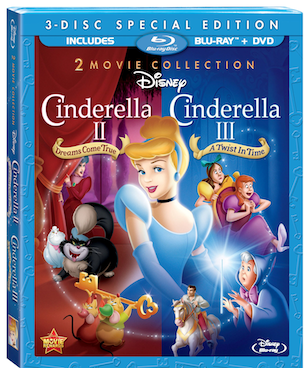 My daughter and I love the Disney Princess’s, and one of the first ones that I shared with my daughter when she was little was Cinderella. My daughter instantly fell in love with the princess who went from rags and being a servant to riches and being a princess. Then when Cinderella II and III came out, my daughter fell in love all over again, watching how simple Cinderella kept her life even though she had a whole kingdom at her finger tips, and how she never once took what she had for granted! Well, recently we were sent the Blu-Ray combo pack that has not one but two of the Cinderella movies in one package, which is a huge plus for my daughter! In Cinderella II, Cinderella finds herself figuring out what life is like in the palace and learning what her new responsibilities are, which are more than she had imagined. I love that no matter what life hands her, she still knows that the only way to make your dreams come true and to be happy is to be true to yourself! Then in Cinderella III, Cinderella’s evil stepmother and stepsisters are up to no good and end up stealing her Fairy Godmother’s magic wand. The stepmother takes the magic into her own hands and turns back the clock. She then erases the Prince’s memories of Cinderella and puts a spell on him that makes him think that the stepsister is his true love. Luckily for Cinderella, her mice friends Gus and Jaq are watching out for her and rush to save the day before time runs out!! These are both great movies to share with the princess in your life, and aside from the two great tales that you get with the Blu-Ray set, you also get all of the great bonus features which include Princess School and some great music as well as much more!! So this holiday season when you are looking for a great gift to get that princess in your life, get her the Blu-Ray set Cinderella II and Cinderella III!!


This was not a paid post and honest/original opinions were used and they are my own. Thank you to the company and/or pr agency who supplied the product for review.