My Robert is a huge Star Wars fanatic. Sure, he may only be 4 years old, but he knows more about the Star Wars movies than I do, and over the past year, he has wanted anything and everything to do with Star Wars. One of the things that my husband and I have decided to do for him was to change the theme in his room to a Star Wars theme. We have found the bedding, and a friend of ours gave him a custom Star Wars toy box, but something that we thought would really stand out and that Robert would really like would be a giant Star Wars picture on his wall. We had looked around at many different posters and such, but nothing really stood out until we found the ultimate wall decoration from Fathead, where we found a great collection of Star Wars wall graphics at Fathead.com! When we saw the Millennium Falcon we knew that this was exactly what we were looking for. I love how big it is and how much detail it has. I also love, that even though this wall graphic is enormous, it was not that hard to put up. When it came in it was rolled up in a tube, then after we flattened it out on the floor and let it sit there for the amount of time that was on the instructions, it was ready to be taken to his room and put up. We were worried about it rolling back on itself while we were putting it up, but after following the instructions, we did not have any issues with putting it up. Then once we had it up, it was time to reveal it to our Robert. He was ecstatic, and could not believe how cool it was. We still had a few wall graphics left and Robert decided that he wanted to make his room an official Star Wars room by putting the Star Wars wall graphic on his door! 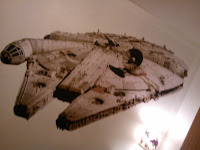 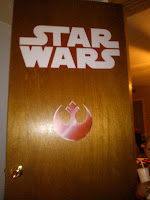 Not only were we very pleased with the outcome, but Robert was as well, and we also know that when we are looking for entertainment themed wall graphics or if anyone we know is, we will go to Fathead.com and be able to find just what we are looking for there! Well, since we love our Fathead and had such an amazing experience from easy navigation and selection on the site to putting up our Fathead in our house, the wonderful people from Fathead would like to give one of my amazing readers their own Fathead!!

Open to US residents!