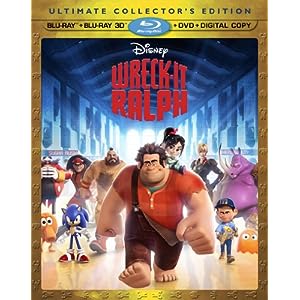 My kids have been waiting, and got me excited as well, for the release of Wreck it Ralph on 3D Blu-Ray!! My daughter had the chance to see it in the theater, but she did not get to experience it in 3D and since my son and I had not seen it yet, we were very excited to get our hands on this movie! So when it arrived the other day, I could not get it out of the packaging fast enough, lol. My kids knew it as soon as I asked them to guess what movie came in for review! Wreck it Ralph is a gaming character, one that sees himself to be in the wrong place. He has been the destructive character in his game for many years, and after doing his job the way he was programmed to do day in and day out, he decided to make a change and head over to the game central. He lives in the gaming world, and he longs to be the good guy, no longer the bad guy, so that he too can be loved. Ralph learns of a game, where he sees himself as being the good guy, the hero, and he decides to go to this game and insert himself as so. On his quest, he ends up wrecking everything and unlocking a very bad and deadly enemy which then threatens the rest of the games. Ralph then finds himself needing to fix what he has done, and he makes some unlikely friends along the way. Not only did we get to enjoy the movie that we anticipated from the comfort of our own home, but we also got to enjoy it 3D, which we have found to be an experience that makes movies come alive for the entire family! I loved how this movie not only brought those video game and arcade game characters come to life, but in 3D, they come right to life in your living room! Wreck it Ralph is a must have to add to your family movie night and with all of the bonus features that come along with this movie, I would suggest getting the absolute best experience by enjoying it and sharing it on the 3D Blu-Ray!! Wreck it Ralph is now available to bring home today!!