My Robert is a huge Matchbox fan. He has been collecting Matchbox since he learned how to walk, and with the 60th Anniversary upon us, he is excited about the anniversary packs that are available for sale. Aside from that, he is also very excited about the contest that Matchbox is holding for their young fans. From now until May 10th, parents with kids ages 3 to 10 years old can enter their kids on the Matchbox Facebook contest, Matchbox Heroes Wanted, where Matchbox is celebrating 60 years by hosting an amazing contest where one entrant will win a grand prize of a $60,000 scholarship!! Also, every week that the contest is open, they will be giving away 60 prizes to 60 amazing participants which will consist of four heroic vehicles, a branded Matchbox gift box, a personalized photo frame and a thank you card! To enter, get your kids in their favorite heroes outfit whether it be a firefighter, nurse, or a comic book hero. Think about it, who does your child see as a super hero? Then upload their photo to the Matchbox Heroes Wanted contest and caption it to be entered! My Robert sees his Dad, who was a Marine as a hero, he also sees his cousin who is in the Army, a uncle who is also in the Army, two uncles who were in the Navy, and a cousin on my side who is a Second LT in the Marines all as heroes to him, but unfortunately we dont have a uniform that can represent all of those decorated heroes, so Robert being the little boy he is, decided to make his own mixture of Super Hero. A Rey Mysterio Spiderman Super Hero mix, because just like the men he idolizes in his life, he does not have just one super hero!! So get your little super heroes dressed up and enter them in the contest today, so they can show off their own super hero powers over on the Matchbox Heroes Wanted contest!! 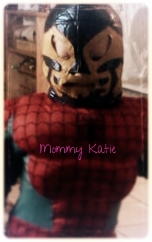 This post was part of a sponsored campaign with MomSelect, all opinions are my own.