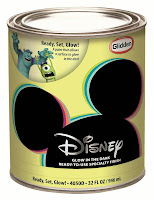 Now that we have picked out a theme for Robert’s room and we have figured out which walls we will be painting in his room, it is time to execute and create!! I think Robert is just as excited as I am for this project. If you are a little lost on what I am talking about I can back track for you. A couple of weeks ago, Robert and I got the chance to paint his room and redecorate it the way he wants it. He loves Disney, and one of his favorite characters is Buzz Lightyear, so naturally we went with a theme that was a Disney Buzz Lightyear theme and we picked up some of the Glidden Disney Ready Set Glow! Paint at Walmart for his room! Well, once we got the paint, we also decided to get some stencils so that we could put some cool designs on his walls. He wanted to go with some space aliens and other out of this world things, so we found some stencils that he liked and we will use. We also picked up some painters tape, a painting tray and some paint brushes. Before we left, Robert decided that if we were going to paint some aliens on his walls, that we should put some googly eyes on them, so we ran to the art supply isle and grabbed a bag of googly eyes that we will be using on our alien friends! This task was one that I knew would be a big one, but I had promised Robert that we would do it, so the first thing I had to do was get rid of all of the popcorn texture that was on the walls that we had chose to paint. To do so, we had to strip the walls, then put a couple of coats of paint on them. Robert did not want a whole lot of color and said that he just wanted white under the Ready Set Glow!, so we had to paint the walls white, and let them set before we could start putting up our space buddies and other space items that Robert picked out! Here is a picture of the walls after they had been stripped and painted, and before the Ready Set Glow! went on. 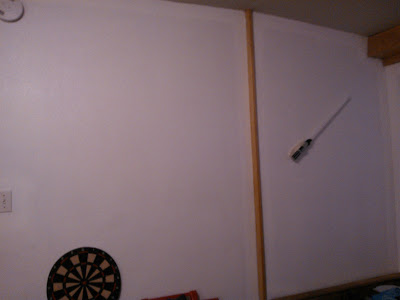 We decided to get the painting under way a few days after we had repainted the walls. To get started, we set up the stencils where Robert wanted them, and taped them with the painters tape, in place. Once they were in the right place, we mixed our Ready Set Glow! Disney Paint from Glidden and poured some of it into a paint tray. Then we got the paint brushes, we got just enough paint to where it was not dripping, but to where it would be thick and color in parts of the stencils. I put our paint tray on a chair so that we did not have to bend down constantly to get more paint on our brushes, but each time we got paint on our brushes, we would then go to the wall and paint inside the stencils. Once we thought we were done with a stencil, we would lift the bottom part up, like shown in the video below, and check to make sure we filled in all of the spaces, then once done, we would carefully remove the stencils. We did a pretty good job of getting the scene that Robert wanted up, then once we were done painting, we got the googly eyes, and just stuck them to the still wet paint on the wall to the places where we wanted them. They are still in place, so I am confident that we will not be needing any glues to keep the eyes up on the aliens. The mess was minimal and the end result was amazing. We are planning a reveal party this weekend with some of Robert’s friends, so once we do that, I will reveal the walls to my readers as well! So until then! Also, if you are interested in the Glidden Disney Paints like the Ready Set Glow!, then head over to your local Walmart or check out DisneyPaint.com and see where you might find some of these paints near you!!

Compensation and products for review were provided by Glidden via MomTrends.  The opinions expressed herein are those of the author and are not indicative of the opinions of Glidden.