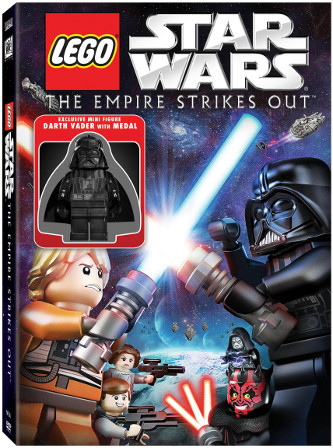 Robert loves Star Wars, and he is a huge fan of Lego Star Wars! From the video games to the toys, Robert loves everything that has to do with Star Wars, so when we heard that there was a Lego Star Wars movie coming out to DVD, Robert was ecstatic! Robert loved being able to watch Lego Star Wars on Cartoon Network, and it was something that he talked about quite often, so when the movie came in for review, Robert found himself not being able to open the box fast enough! In the movie Lego Star Wars: The Empire Strikes Out, you find all of your favorite Lego Star Wars characters like Luke and Darth Vader. This is a great movie for little boys and even big boys for that matter, it is filled with fun action and comedy that all can enjoy! In this movie, Luke finds himself as a celebrity after taking back the Empire, and he also finds that being a celebrity is not all that great. He is still a Jedi in training, and being a celebrity kinda makes it hard for him to go on any secret missions. While on the Dark Side of things, you have Darth Vader and Darth Maul having a funny feud of sorts over the favoritism of the Emperor! This is a great movie that is not only a good addition to any little Star Wars fans collection out there, but also a great movie that the whole family can enjoy and that can be added to a family movie night! Lego Star Wars: The Empire Strikes Out is available now to bring home and share with your young padawans today!!