My son loves super heroes, I mean really, I can not think of a little boy who does not have a super hero who they do not love. It seems that when we look at new movies or shows on television, there are always movies with his favorite super heroes in them and of course, we seem to always be able to find the shows with them as well. Recently we were sent some really neat super heroes that are not like any of the action figures that Robert already has.

These guys fly, I mean they really do fly, and Robert just finds that to be way too cool!!! We were sent the awesome Superman Flying Hero from The Bridge Direct to review. He comes with his own launcher, and when we go outside, Robert can launch him into the air and watch him really take off just like the real Superman! Robert and his friends love to take turns launching Superman into the air and watch him spin off and fly. Your little super heroes can too because the wonderful people from The Bridge Direct would like to send one of my amazing readers their own Flying Superman Hero!! 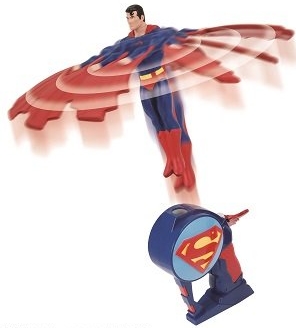