We love having parties at our house! Whether it is for a movie viewing or for checking out new products and tasting new foods, we enjoy hosting the events with our friends! Recently we were sent an amazing pack of toys and a new movie to go with the toys from Mattel. We were sent the new movie Barbie Mariposa and the Fairy Princess to watch and share with my daughters friends along with new Barbie dolls from the movie for each of the girls, some fairy wings and some party essentials! To get the party started, I got some cupcakes, popcorn, juices and waters for our guests. I then set up the table in our front room with all of the party favors and treats on it to greet the guests with when they arrived. 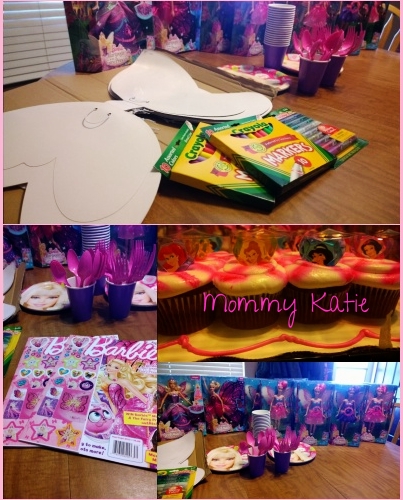 All of the guests and their parents were amazed to see the setup as they arrived. Once all of the girls were here, I announced the plan for the party. We handed each girl their own Barbie Mariposa and the Fairy Princess dolls from the movie. After everyone had a chance to open their dolls and play with them for a few minutes, I popped some popcorn and directed all of the girls to the room so they could watch the movie Barbie Mariposa and the Fairy Princess. As the girls watched the movie, I sat in the front room and discussed the dolls and the movie with the parents. All of the moms agreed that they thought the dolls were adorable, and they loved the idea of bringing the Barbie Mariposa and the Barbie Fairy Princess together in a new movie. The girls enjoyed the movie, they all also enjoyed having their dolls to play with while watching the movie together. When the movie was over, we had the girls join us in the front room for cupcakes, juice or water and some movie trivia. I bought some fun prizes to give out for the trivia, so as the girls answered the questions correctly, they won a prize, which included 2 Barbie Magazines that we were sent to go with the party! The girls then talked about the movie and their thoughts on it. They all agreed that seeing Mariposa as the new Ambassador of Flutterfield was a good idea. It was her job to bring peace between her fairy land and their rivals the Crystal Fairies from Shimmervale. While trying to make an impression on the King, Mariposa meets the Princess Cantania and the two become friends. When Mariposa leaves Shimmervale to head back to her home, she runs into a dark fairy who is headed to Shimmervale as to destroy it. Mariposa rushes back and joins forces with Cantania to save Shimmervale. The two show that the best way to make a friend is to be there for your friend and actually be a friend! Myself and the other parents enjoyed learning about the movie from the girls and we loved knowing that the girls not only enjoyed the movie, but they also learned from it. After the snacks and trivia were over, we cleaned up the table and set up for some Fairy Wing making! The girls was so excited to show off their fairy wing designing skills and makes their own fairy wings so they could all fly home like the fairy princess’s they are! In all, this party was a huge success and if you and your girls are Barbie fans, then keep your eyes open for the new movie Barbie Mariposa and the Fairy Princess as well as all of the dolls and playsets that will be available to go along with this movie when it hits shelves this Tuesday! 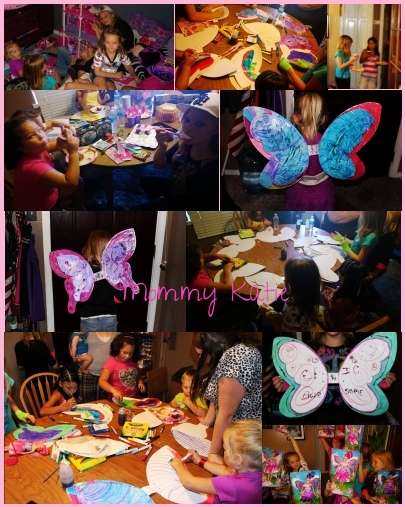 This was not a paid post and honest/original opinions were used and they are my own. Thank you to the company and/or pr agency who supplied the product for review. The party and the supplies for the party were provided by Mattel and Universal Pictures!