It is hard to believe that Wyatt is already 1, but it is true, and I as the mommy have to prepare him for the next stages. I think that one thing that most people I talk to have issues with is breaking baby of the bottle. Now with my older 2, I had no issues, we took the bottle away and gave them training cups and that was that. So when friends would talk about how hard it was to transition their own babies from the bottle to cup, I did not understand why it was so hard. Well, I now know. Yes, Wyatt is my hard one. He loves the bottle, and trying to go from the bottle to cup has not been easy, in fact it has been a lot more difficult than I ever imagined. We have decided that trying different training cups might be the key to a easy transition, and until recently, I had not found one that he absolutely has to have. I mean, with both Estrella and Robert, they right away had a favorite and never looked back at the whole bottle era. Not Wyatt, he has tried numerous cups, some he has liked and some he plain refuses to use, and when we were sent the MAM Trainer Cups, I was curious to know how they would work for him. Dont get me wrong, we have been using the different training cups from the various companies from the time he was 6 months old, and he has used some of them, but I want to be free of the whole bottle phase and transition into the training cup. One thing that I really liked about the MAM Training Cups is the fact that they are MAM, Wyatt has loved the MAM pacifiers and bottles from the time he was born. We have used the bottles to put breast milk in and the transition from breast to bottle and back when others would feed him, was easy. Then the second thing that I really liked were the spouts. Over the past few months we have been using the soft silicone spouts, but those training cups were also little and wide, and I want to get into the toddler stage since he is now 1. The other training cups that I have found that are for toddlers, all have that hard spout, and some have been ones that Wyatt will use, but most he will have nothing to do with.

So when I gave Wyatt the training cups and he grabbed the soft spout, I stood there waiting to see his reaction. I was nervous, since we have tried different cups and he would not even give some of them the time of day. With the MAM Trainer Cups, Wyatt found that not only did he like the soft spout but he also liked the handles, which really made it easy for him to grasp and carry with him as he played with his friends at the park! 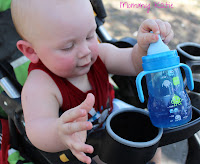 Aside from the MAM Training Cups that Wyatt, found to be a new favorite, we were also sent the MAM Learn To Drink Cup. We found that like the training cups, this one also had a nice soft spout, and was also easy for Wyatt to use. In all Wyatt has enjoyed both of the training cups from MAM, and I really like knowing that the headache I was having due to Wyatt not wanting to transition from the bottle to cup, will soon be behind us thanks to MAM! 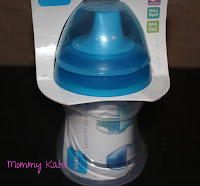 Well, since Wyatt not only loves his new MAM cups, but also because he is celebrating his first birthday, the wonderful people from MAM would like to give one of my amazing readers their own MAM Trainer Cup and MAM Learn To Drink Cup!