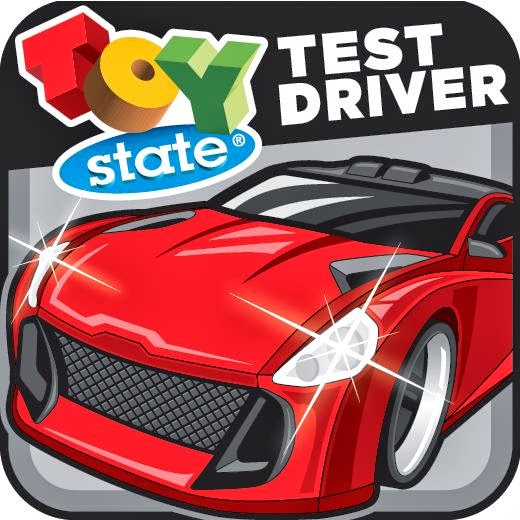 When it comes to Robert and my husband, the two find themselves with a lot the same interests. My husband tends to remind me of a big kid at times like when he plays with our kids. With Robert getting older, and my husband finding that the two of them can enjoy the same type of toys that my husband enjoyed when he was a child, they find themselves being able to bond on a different level. One thing that my husband and Robert and now even Wyatt all enjoy is trucks and cars. My husband has collected them for Robert and when Wyatt sees all of the fun that have rolling and racing vehicles on the floor, he finds that he can now join in on the fun. Recently I was chosen to be a ToyState Test Driver. With that I, or shall I say, my boys and my husband, get to test out some really cool trucks, cars and remote control vehicles that come our way. To begin our journey as a ToyState Test Driver, we were sent our first package filled with awesome vehicles that have been a hit at our house since their initial arrival. 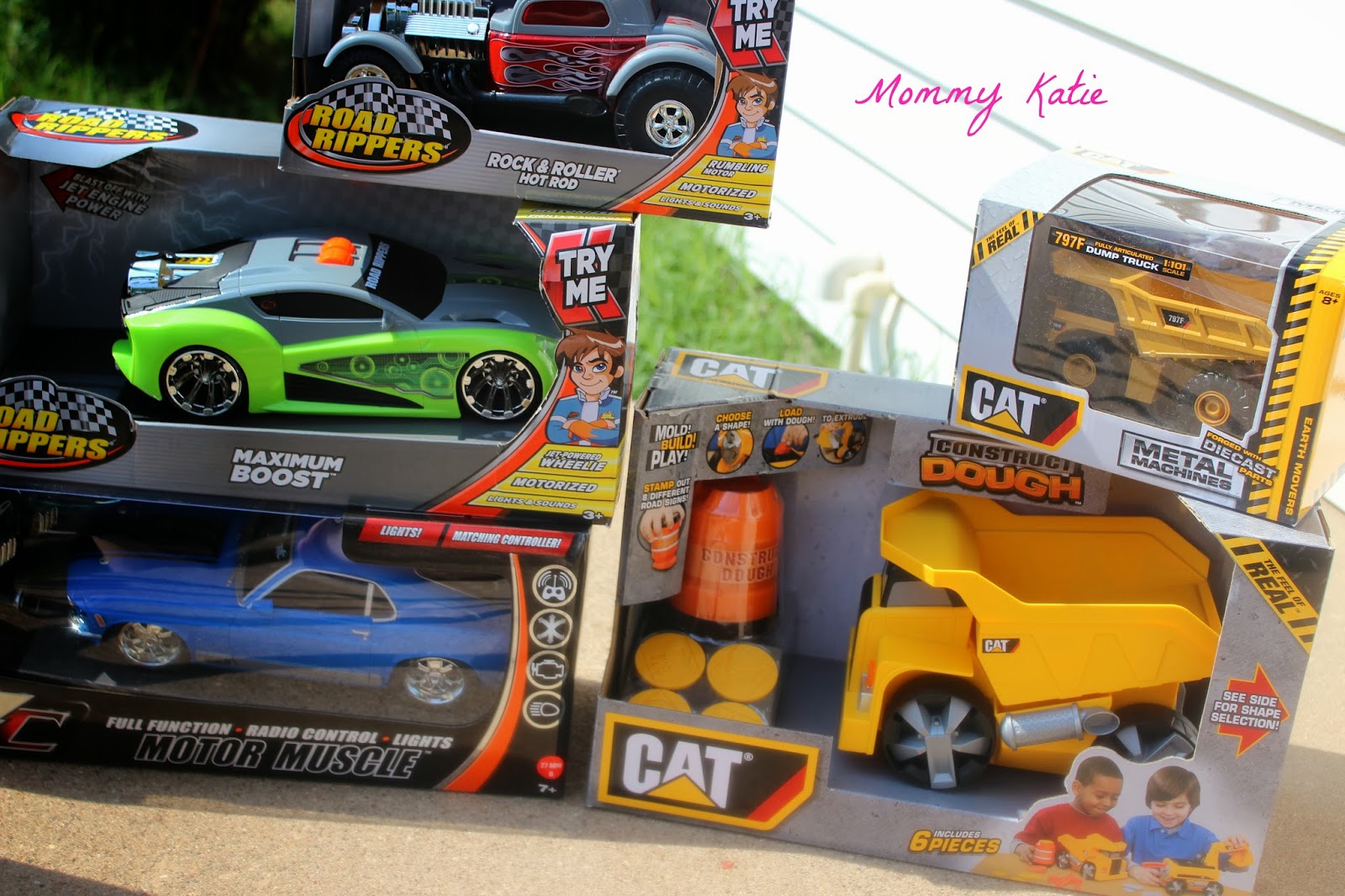 When the package arrived, my husband was home and I knew that our first package of vehicles was here due to the sounds of remote control vehicles coming out of the front room. I think my husband was more excited about the arrival than I was. He could not seem to wait to start playing until Robert got home from school, but I was able to snap a few photos before I let the boys take over the toys. Wyatt even found the dump trucks to be fun to haul his blocks around with and vroom on the floor with his dad and older brother.
After convincing my husband to wait until Robert got home from school to take all of the toys out, I found the anticipation was quite amusing. Robert and my husband right away found the Motor Muscle to be the first to be opened, followed by the Maximum Boost and the Rock & Roller Hot Rod. 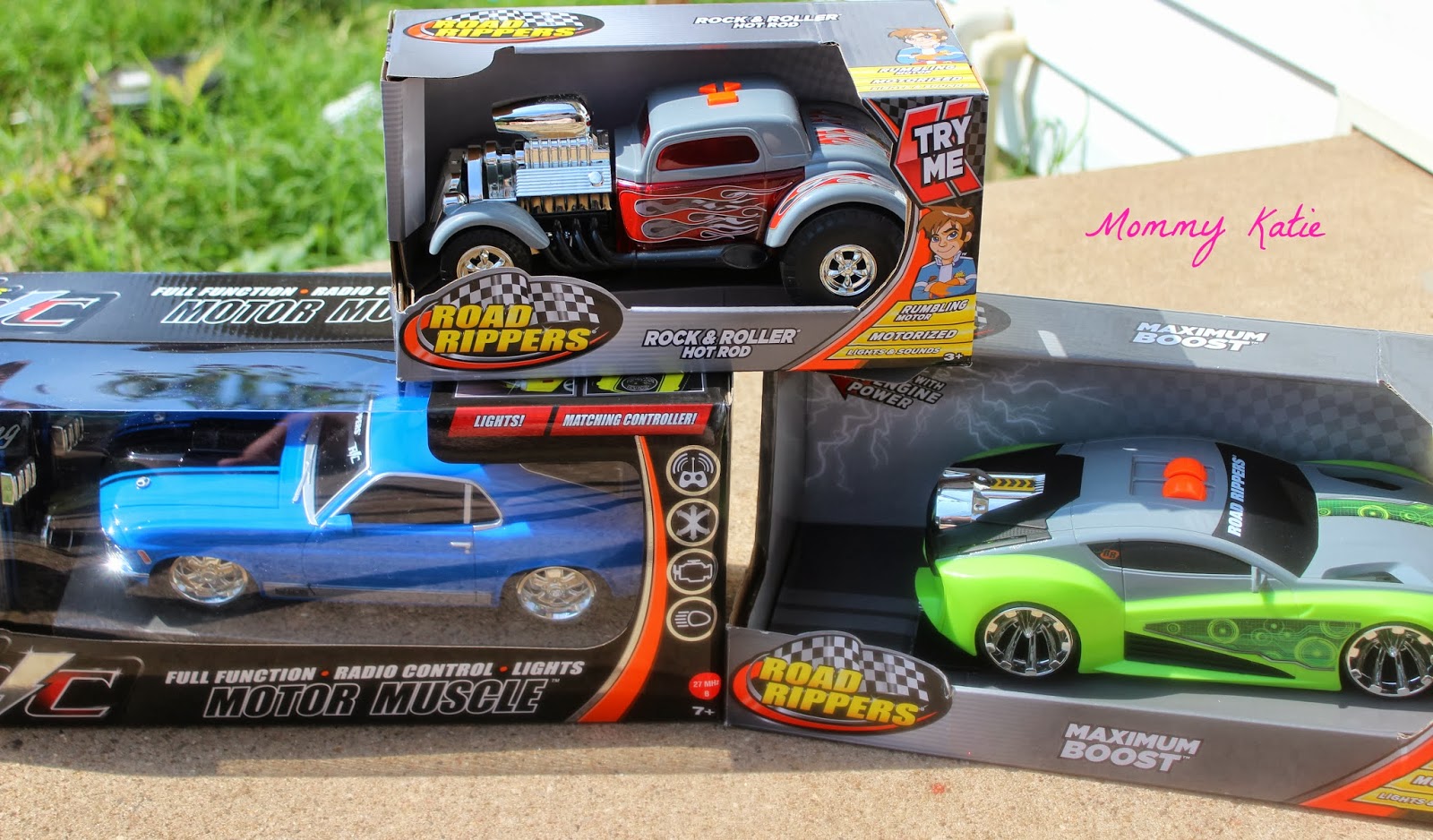 With the Road Rippers, we found the Rock & Roller to be a great car with not only great realistic looks, but also some great music to go along with the cool sounds that the car makes. The Rock & Roller is great for putting on the sidewalk, then pulling backwards to get the car ready to race in a old fashioned drag race! Robert and my husband found the Maximum Boost to be a car that was worthy to go in a drag race against the Rock & Roller. With the rocket boost that this car has, you get that realistic rocket boost action which makes this a tough opponent. We all found it to be a lot of fun to watch as the Maximum Boost car propelled forward, which can cause it to pop a wheelie when in a close race! Then, with my personal favorite out of the racing cars that we were sent comes the Motor Muscle. Like the other 2 cars, this one also plays music, but it plays just one song, ‘Mustang Sally’, which is very suiting! I adore the 1970 classic Mustang Mach 1 with the remote control. With the racing cars that we were sent, my husband and son have found them to be a lot of fun to take outside and race around! 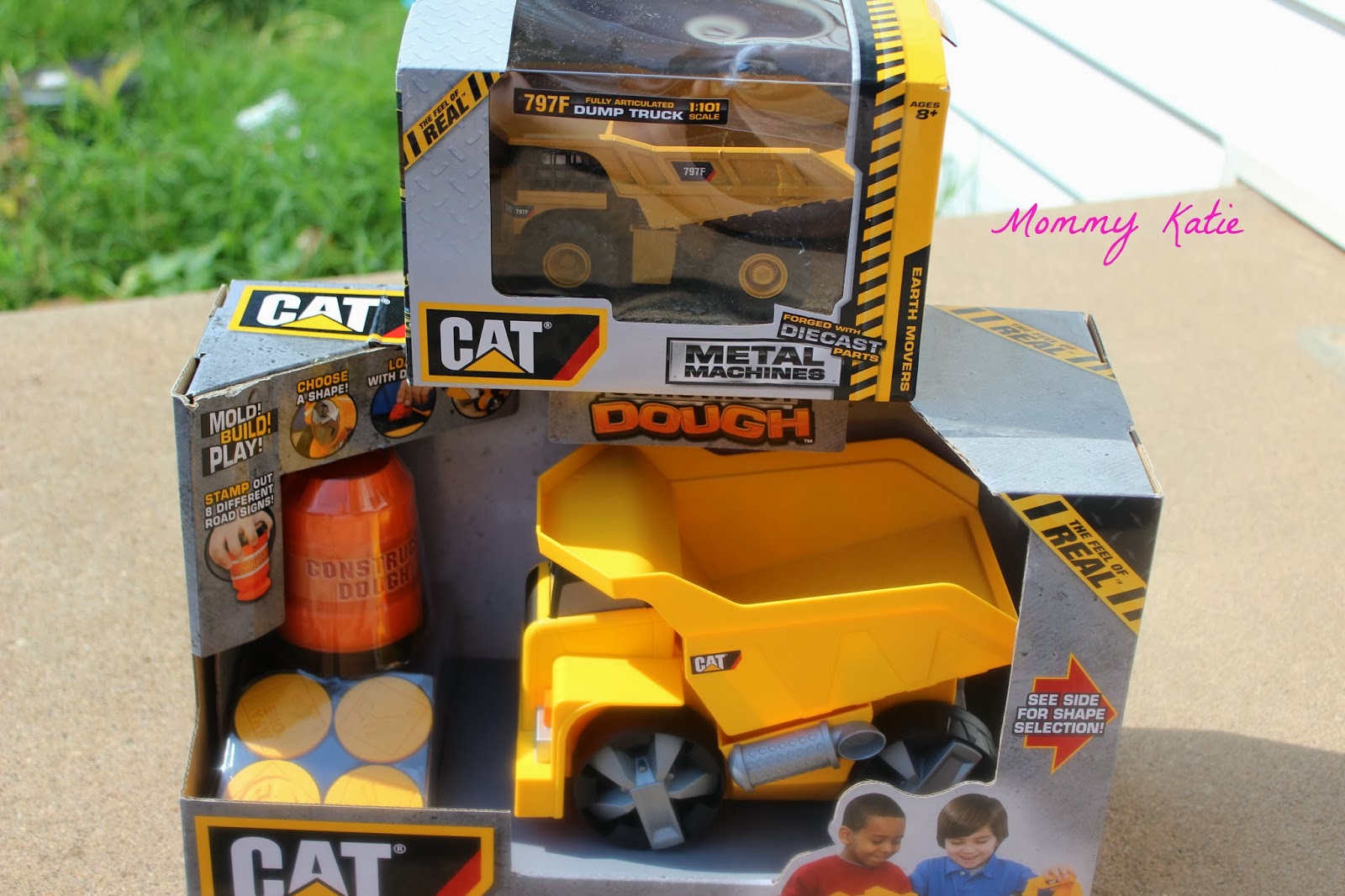 For the CAT trucks we were sent, we found that with supervision, Wyatt enjoys playing with them with his big brother! With the Construct Dough set, Robert found it to be a lot of fun to play and mold the dough then stamp it. The accessories that come along with this set make the construction site a fun one for Robert to really enjoy. With the truck alone, Wyatt finds it to be a lot of fun to fill up with his blocks then dump them in another spot. But the one that really has caught Wyatt’s attention is the CAT Metal Machine. This is one that really brought my husband back to his childhood, when the trucks were made of metal, and were built to withstand boys and their toughest play. Just like the Construct Dough dump truck, Wyatt finds the CAT Metal Machine dump truck to be a lot of fun to put his toys in then dump them out in another part of the room. Wyatt took more to the Metal Machine because his older brother Robert prefers to play with the Construct Dough set so it gives Wyatt more play time with a truck of his own. In all, we found the set of vehicles from ToyState to excel our expectations, and they are also all vehicles that if a friend wanted to know what to get their boys, we would suggest any one of the vehicles we were sent! So if you are looking for some great racing, remote control or construction vehicles, then check out the great selection of vehicles from ToyState today! Also keep your eyes open for more reviews on the vehicles from ToyState that will be featured right here on Mommy Katie!