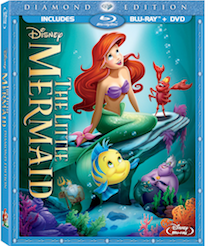 I does not seem like that long ago, but I can remember when Disney’s The Little Mermaid was in theaters. I was just a little girl, and I went to see it with my aunt. I fell in love with the movie, and I had memorized all of the songs from the movie, to use when I would go to auditions as a child. So, for me to be able to share that same amazing movie that had once mesmerized me when I was a little girl, along with the songs, with my own daughter, brings me back. Recently we were sent The Little Mermaid Diamond Edition Blu-Ray Combo Pack to watch and review in my house. I love knowing that even though it might be a Disney Princess movie, my son enjoys watching it as well for all of the adventure. He is not so keen on the whole love story aspect, but he finds the beginning where there is the ship that explodes as well as when the sea creatures and birds crash the wedding, to be very entertaining. Estrella finds, just as I did, the fantasy of a mermaid princess, who longs for adventures beyond the sea, and to win the love of her prince, to make a great movie that really captures our attention! With Estrella into music and acting as I was when I was little, she enjoys singing along with the songs and she also finds Ariel’s singing voice to be so beautiful. With this great combo pack, we not only got that movie that we know and love, but the quality is unlike any other, from the picture to the sound, we found that it was like watching Ariel and her sea creature friends and listening to her amazing singing voice, for the first time all over again. We also really enjoyed the bonus features which included a all new music video along with the classic DVD bonus features! With this set, we can enjoy the blu-ray or DVD version of the movie, which is great for when we watch it on the big TV in the living room together or for when the kids choose to watch it in the playroom on their DVD player! Well, since today was the official release of The Little Mermaid Diamond Edition Blu-Ray Combo Pack, the wonderful people from Disney would like to celebrate by giving one of my amazing readers their own copy of The Little Mermaid Diamond Edition Blu-Ray Combo Pack!!