This is a Sponsored Post, all opinions are my own!

There are issues in this world that can be hard for some to face, ones that no one should have to face, but end up in situations and are scared to speak up. The situation I am talking about is domestic violence. 74% of Americans either have been or know someone who has been abused. There are many who see this horrible thing first hand, or that know someone who is suffering from it but do not know what they can do or how they can help those in the situation. There are many different types as well, from physical abuse to emotional abuse and even financial abuse, the fact of the matter is, abuse is abuse. For me, I have been unfortunate to have been in a situation where there was abuse, both emotional and physical. I know that reaching out is harder than most might think. I mean, I had always thought that I would never let myself get in a abusive relationship, and I know that when my family had found out, they were in shock that they did not see the signs. Now, those who were close to me saw the signs, and they tried to reach out to me, but for a long time, I was in denial. I had covered up marks, called in to work so that others would not see me, and I kept telling myself that I could fix things, that it was not really happening to me. I was scared, scared of my abuser and scared of what others would think when they found out. I learned that once I did reach out, it was the best thing I could have done. I found help to get away from my abuser, also that I had people who cared about me a lot more than I had thought, and that I was stronger than my abuser and I not only got away, but I stayed away, never looking back to that way of life. I know that there are still times that I ask myself how I got into the situation, and how I allowed the abuse to go on as long as I did. The answer was that I did not know that I had the support that I did, and when I hear of others who are in similar situations, I know that I can share with them and help point them in the right direction for help and to get away. Now that several years have passed since my own experience with abuse and that I have learned and grown from my own situation, I find that empowering others to get out of and move on from their own situations to be very important to me.

With the month of October being Domestic Violence Awareness Month, I found that joining the Allstate’s Purple Purse campaign to be a mission. The mission for me is to pass it on, pass on the Purple Purse that I was sent, along with the information that is on the cards that comes along with the purse. The message you get with a Purple Purse is not only to look for those warning signs, but to also empower others to talk about it and reach out. To know that domestic violence affects more women than breast cancer, ovarian cancer and lung cancer combined, makes the situation and the urgency to reach out even more important. There are women out there, who may not realize that they are in a abusive situation and who do not reach out until it is too late, and by passing along a Purple Purse with the message cards that are found inside, we can help break that cycle, and help those who need it by being a friend, someone to talk to, and someone that can help them get away. 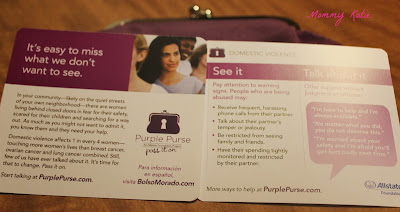 Head on over to the Allstate Purple Purse Facebook page and learn how you can get a Virtual Purple Purse and pass it on!

This post is part of a sponsored campaign with The Allstate Foundation and MomSelect. All thoughts and opinions are my own.