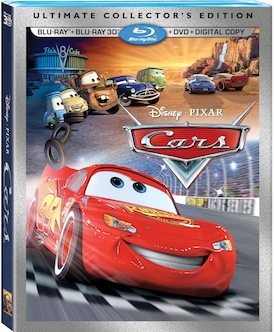 If there is a ultimate fan out there for Cars, well then I would have to say that my son Robert can fill that position. He has been a fan of the movie and the characters from the time he learned how to walk. For the first few years, if we or anyone wanted to get him something, it had to be Cars, and we had his entire room, from the actual bed and bedding to the curtains and decor for the walls, all in a Cars theme. So when we were sent the Disney Cars Ultimate Collector’s Edition on Blu-Ray 3D, Robert right away stated that this was sent just for him. On this set, you get McQueen along with the rest of the crew from Radiator Springs in that same movie that Robert had fallen in love with, but better. You might be asking, how could this amazing racing movie could get any better. Well not only does it get better but it also gets bigger, by bringing the full on action right into your living room, making the movie even more real than before. In the 3D effect, McQueen comes off the screen and zooms on by you while racing, in what seems right in your reach. I personally found that the scene in the dessert of Radiator Springs, where you get the detail, making it feel like you are right there, looking over the beautiful desert, really brought this movie to life for me. Robert and the other kids, enjoyed putting on the glasses and watching McQueen, Mater and the others come to life, in 3D right in our living room! Aside from the Blu-Ray 3D, you also get the Blu-Ray and DVD that can be enjoyed as well! In all, we found the Disney Cars Ultimate Collector’s Edition on Blu-Ray 3D to be the perfect fit into our collection of Cars movies, Disney favorites and our collection of 3D family movies! So this holiday season, bring home Cars Ultimate Collector’s Edition on Blu-Ray 3D for the whole family to enjoy!


This was not a paid post and honest/original opinions were used and they are my own. Thank you to the company and/or pr agency who supplied the product for review.