The question of what happened once the famous princess’s got their ever after, is answered. They had princes and princess’s of their own, and as their children got older, they were sent to Ever After High, which is a boarding school, so they could learn to walk in their parents footsteps. The school is filled with the kids of those fairy tale folks, where the page has been turned. Not only do you have the children of the princes and princess’s of the fairy tales that we all grew to love, but you also have the children of the villains. One such child of a famous villain is Raven Queen, who is the daughter of the Evil Queen. Raven finds herself questioning her fate, her destiny to become the next Evil Queen. She finds that she is destined to poison a fellow classmate, Apple White. She then gets the rest of the students in the class together, and has them all questioning their predetermined fates. This divides the class into two groups, the Ever After Royals, who want their promised Happily Ever Afters, and the Ever After Rebels, who want to rewrite their storybook endings and not follow their parents fairy tales. So the question is, are you a Royal or a Rebel? That is where the dolls from Ever After High come in. They are more than just dolls, they represent the future in the world of fairy tales.

Then with Briar Beauty, you have a Royal who is a adventurous royal it girl! We have found these dolls to not only be highly collectible, but as Estrella and her friends has mentioned, they are some of the must have toys on this years holiday lists! Well, to help with those holiday lists, the wonderful people from Mattel would like to send one of my amazing readers their own Ever After High Doll! 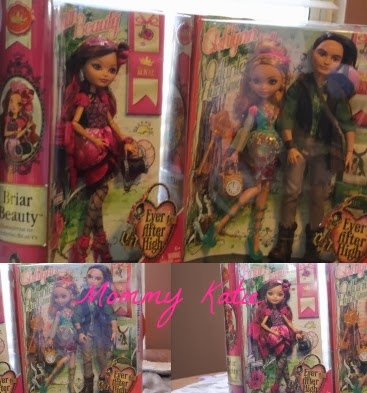