This is a sponsored post. Thank you to Mom It Forward and Hasbro for sponsoring this post.

With the holiday season upon us, and the cooler weather here as well, I look for products that I can not only consider for putting under the tree this year, but that will keep my kids busy while they are cooped up indoors. I enjoy finding items that can be played with together so that my kids can interact with one another nicely and have fun doing it. When it comes to finding these items, I like to find things that have my kids favorite characters in mind. Well recently I was sent a set of build it yourself bots for Robert, his older sister Estrella, and I to play with from his favorite team of transforming bots, the Transformers. We were sent the Transformers Construct-Bot set from Hasbro to put together and review. Due to the fact that it does say the recommended age is 8, I helped Robert with the project. I found that he was able to pick up on the easy to follow instructions right away, really not needing my help constructing his own Transformers. 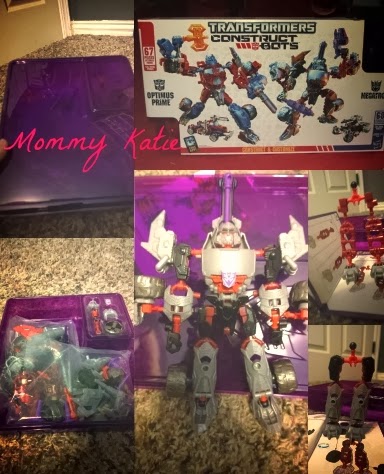 With this set, Robert was excited to see that he could not only build one Transformer of his own, but he could build Optimus Prime and Megatron, so once he completed constructing both of his bots, he could prepare them for battle! He found the cool weapons that each bot came with to be optimal for creating a mega battle of his own! When we headed over to the Hasbro Transformers site, we found that there was this amazing app that we could download, so Robert could take his Construct-Bot Transformers on the go, and customize, build and battle anywhere! There is also a toy code that came in the pack of parts for his Transformers Construct-Bot, so he can get virtual bonus parts, to make the fun on the App even better! With all of the parts that came in his box, he can create his own bots, and build all new Transformers to get ready for the ultimate battle! Then, once Robert is done building and battling with his Bots, he can take them back apart and store them in the boxes that came along with the bots. In all, we found the new Transformers Construct-Bot toys from Hasbro to be great for keeping the kids busy both in building the bots that came in the boxes, as well as the bots that can be built on the app, and making for some great gifts to put under the tree this holiday season! So this holiday shopping season, while you are out looking for some toys that will not only make for a great gift, but that will also keep the kids busy, take a look at the Transformers Construct-Bot toys from Hasbro!

This is a sponsored post. Thank you to Mom It Forward and Hasbro for sponsoring this post.