I must admit, when it comes to shopping for my kids, having both boys and a girl, the items they want for the holidays can not be more different. I mean for Estrella, she loves the girly things that are on the market. She loves being able to create things and anything that sparkles or shines, well, she finds herself in awe. Like this year, they have both told me things that they want for Christmas, but with Estrella, she of course wants the cutesy, sparkly things, then Robert, well he wants the grotesque things. For instance, this year, Estrella asked for some Glitzi Globes. I can see why, they are these adorable snow globe things, that are not only cute and sparkly, but she makes her own snow globes. And with the Glitzi Globes, Estrella can create and collect a variety of them, they are easy to make and she can make rings, pencil toppers and more with these! We were sent the 3 pack to review, and I not only liked how easy they were to make, but Estrella and I also liked that we can get more to make and she can decorate her room with her own snow globes!!

Then to go to the extreme other side of the spectrum when it comes to boys vs girls toys for the holidays, Robert found himself wanting The Trash Pack toys. With The Trash Pack, Robert can also find himself collecting, but instead of cute and sparkly, he can collect gross and not so cutesy toys. We were sent a pack of the Trash Pack guys, and in this pack we got some trash cans with those trashie characters that he and his friends find themselves collecting. There was also some liquid ooze in the pack, so Robert can gross out his big sister. We found that along with this pack, Robert can collect the 100’s of other Trash Pack characters, as well as play sets, trading cards and other accessories, making this one gross collection that Robert has found a must have! 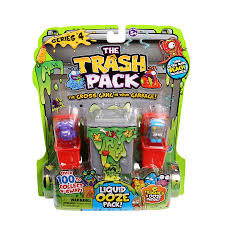 In all, I like that I can find those must have toys that the kids want and can continue collecting even after the holidays are over, all from one company! So this year, while you are searching for some great toys to get the kids, check out the must have toys from Moose Toys!