I can not believe that this year will mark Wyatt’s second Christmas. It seems like it was not long ago that we were celebrating his first Christmas, with him being this tiny baby, but it is true, and I have a toddler to shop for this year. I think that having a toddler does open it up for more options on what we will get him this year. He is very mobile, and he also loves to play, so finding those toys that he will enjoy playing with, is a lot of fun. Even though Wyatt is getting older, he still enjoys those adorable toys from Lamaze. So when we were sent a great pack of toys from Tomy, which included a toy from Lamaze, I knew Wyatt would be pleased. 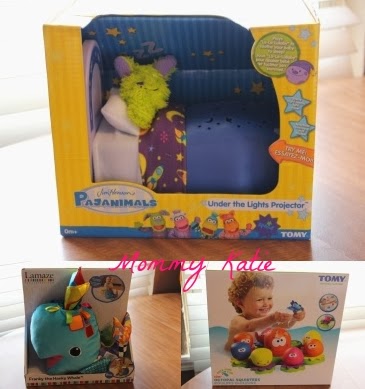 With Franky The Hanky Whale, Wyatt can enjoy pulling tissues from the whales spout and putting them back in his mouth for him to pull out again. This is also a toy that he and I can enjoy. As he pulls the hankies out, I can feed them back in through the whales mouth, all while keeping Wyatt occupied and having fun together! Playing with tissues is something Wyatt is very familiar with, like when he pulls all of the tissue from the box, but when he plays with these tissues, I do not have to worry about the mess, like when he starts shredding the nose tissues. I also like the bright colors and the tail that makes that crinkly noise that Wyatt cant seem to get enough of!

For one of Wyatt’s favorite activities, which is bath time, we were sent the very cute and fun filled Tomy Octopal Squirters! Wyatt finds that being able to squirt mommy while he is taking a bath, is very entertaining for him, so this set of squirters is a great toy for him! Aside from filling up the little squirter guys with water and aiming at mommy then squeazing and repeating over and over again, Wyatt also likes to be able to stick his squirter guys to the side of the bath tub! We also find the mommy octopus, that we can fill up with water then in turn fill up the baby squirters with to be a lot of fun too! Really, if it has to do with water, and has the potential to make a mess, well it is the perfect toy for my kids, so having the Octopal Squirters ready for bath time makes bath time so much more fun! Aside from the all of the water fun that Wyatt can have when playing with his Octopal Squirters, I like that this toy is also a great sorting and matching toy. Each of the baby squirters is different and has a number that matches it up with the base it goes to, making this a toy that makes bath time a fun time in so many ways!

Then, when it comes to the Pajanimals Apollo Goodnight Projector, I knew right away that Wyatt would love this toy. Wyatt and I enjoy watching the Pajanimals on Sprout, so he can enjoy having his own Pajanimal night light toy for his room, that not only gives him a light show, but also plays soothing music! Wyatt loves that it plays the Pajanimals lullaby theme song, so he can watch the lights on the ceiling, and be lulled to sleep by one of his favorite songs from one of his favorite shows on television! In all, we found the great collection of toys from Tomy Toys to be great for Wyatt and will also make for great gifts to give the little ones in your life this holiday season!