When people see a baby, they think, oh how cute, but what most do not think about is that stinky part of a baby, a dirty diaper. It seems that when it is time to change a diaper, that oh how cute goes right out the door and the baby gets passed back to mom or dad to hurry up and change the diaper. I know that in a nursery, even with all of the odor eliminators that you can put in there, you still get a foul smell from the diapers. We tend to take them straight to the dumpster after bagging them to avoid any nasty smells hanging out in the room. I have tried the different diaper disposal systems out there, and I have found ones that I like, but they are all basically the same, at least that is what I thought until I was sent the Tommee Tippee 360 Sealer Diaper Disposal System to review.

With Wyatt, well he is like most babies who are eating food, he stinks. I mean the boy can really clear a room, and it never fails. Friends and family can come to visit and want to play with him and hold him, but as soon as he poos, they hand him right off, and will leave the room until the smell has dissipated. Then due to the dirty diaper not being just a pee diaper, I have to bag it up, and take it right out to the dumpster. Well with the Tommee Tippee 360 System, I can eliminate some of that awful smell that can come from a diaper pail, because when I place a dirty diaper inside, it is bagged separate from the other diapers. You just put the diaper in, twist the dial to seal it! I also do not have to put my hand inside the pail to push the diapers down, making it more hygienic for those changing diapers. And the pail can hold up to 30 diapers! This system seals each diaper all the way around in a antimicrobial film, which helps lock in any nasty odors. The film is easy to tear and the EasiSlide drawer makes the pail easy to open when it is time to empty it! I found this diaper disposal system a sinch to set up, parent friendly when using it, and easy to empty, giving me less time on the whole diaper change and more time to enjoy my Wyatt! Well, to help with those dreaded diaper changes in your house, the wonderful people from Tommee Tippee would like to give one of my amazing readers their ow Tommee Tippee 360 Sealer! 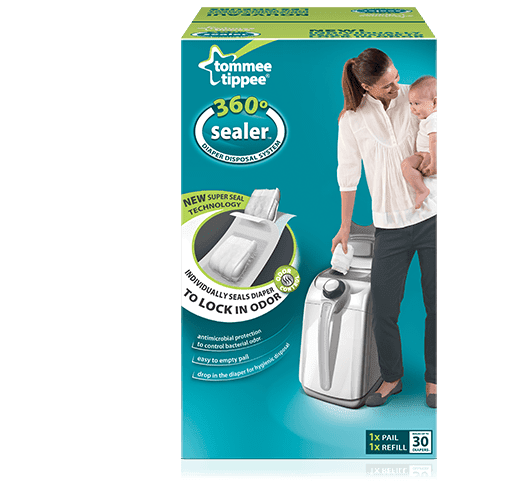