Kathleen,
34, is a married schoolteacher from North Ridgeville, Ohio. She is
like every other ordinary person on the street: well dressed, tall
and attractive. You are not likely to give her a second glance if you
passed her by. However, Kathleen carries a secret. Up until very
recently, she was 296 pounds.

Kathleen
had become very comfortable with her appearance, when one day, while
going through some family pictures from a recent dinner, she paused
at a picture of herself. She could not believe that the woman in the
picture was her, never realizing that she had been slowly gaining
weight, one inch at a time, resulting in the current state of things.

The
picture was the catalyst that made Kathleen decide to change her
lifestyle. After doing some research into weight-loss, she came
across Nutrisystem and instantly liked it. The low glycemic index
carbs helped her control her carb intake, which was a major
contributing factor to her weight loss.

Kathleen
also swears by portion-control. Eating small, healthy meals 5-6 times
a day, helped her feel like she was always full and kept her from
binge eating or cheating on her diet. This is the case with many
other women who have tried Nutrisystem as shown on
WeightLossTriumph.com.
Kathleen also increased her water intake to 64 oz of water a day. 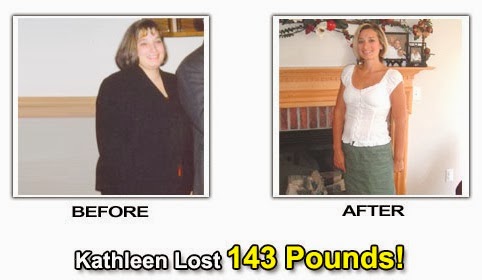 Besides
watching her diet, she adopted an exercise program. She works out 6
days a week, making sure she is always on the move even when she is
not clocking in hours at the gym. She changes her exercise regimen to
keep things interesting by walking, swimming, jogging and trying to
avoid ever taking an elevator.

Kathleen’s
daily, gym routine consists of both weights and cardiovascular
exercises. For weights she rotates between her lower body and her
upper body, using the help of a trainer two days a week and managing
the rest of the days on her own. Her cardio workout includes the
elliptical, treadmill for both jogging and walking and a
stair-climber. She uses these for about half an hour every day.

Kathleen
also found that having a good support system was very important. If
you have someone with you, who is as involved in weight loss as you
are, then you are likely to feel more motivated. It also helps to
have someone to call when you feel like you might fall off the wagon.

Another
motivator for Kathleen was the picture of herself that inspired her
in the first place. She placed this picture on her refrigerator door,
to remind her of her past and keep her from cheating on her diet.

On
a typical day, Kathleen eats half a banana, low fat yogurt and a
granola bar for breakfast. This provides her with calcium and fiber,
keeping her metabolism strong.

Lunch
consists of a large salad with loads of vegetables, yogurt and a
Nutrisystem entrée.

Dinner
entails a large salad with vegetables, French cut green beans, a
Nutrisystem entrée, and one source of fat (peanut butter or olives).

Snacks
include fruit and yogurt in the afternoons and a Nutrisystem dessert
in the evening. Sometimes, she replaces her dessert with a
100-calorie snack item.

Kathleen
lost 143 pound and is now at her goal weight of 153. Maintaining your
weight is as important as losing it, so Kathleen continues to watch
her diet and exercise regularly.