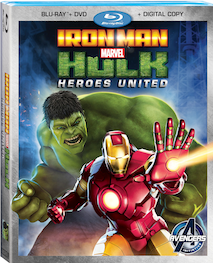 Having sons, I have learned a lot about the Super Heroes from Marvel Comics. I grew up with a sister, and I was aware of the different super heroes that were out there, but I had never really gave them any thought until my eldest, Robert, started to show interest in the different characters. So, I found myself learning about the different characters and becoming a fan of them as well. Of the super heroes that my son adores from the Marvel Comics is The Incredible Hulk and Iron Man. He, like many other little boys out there, admires the strength that the Hulk has and the high tech know how that Iron Man has, so seeing the two team up together in a movie to fight evil, Robert and I found that this was something we had to see! You can imagine that when the movie, Marvel’s Iron Man & Hulk: Heroes United arrived on Blu-Ray for us to review, Robert found himself very excited to share the movie with the entire family on our family movie night. In this great movie, you have the two super heroes teaming up, to make the ultimate crime fighting duo, to fight against the evil Zzzax. This villain is one who almost seems unstoppable. He is a monster who drains energy and who is threatening to destroy the planet. Because of his powers, one super hero can not fight him alone, but with the combined powers of The Hulk and Iron Man, the two can team up and fight to save the planet! The two must put aside differences and work together before it is too late! This movie is full of action, and is a great movie to share with the family and the super hero fan in your life! With the Blu-Ray, you get some great bonus features which include the Marvel Inter-missions! Marvel’s Iron Man & Hulk: Heroes United is available to bring home and share today! 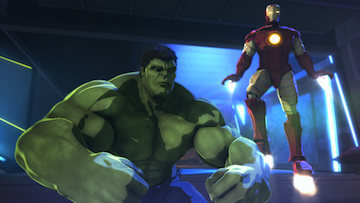