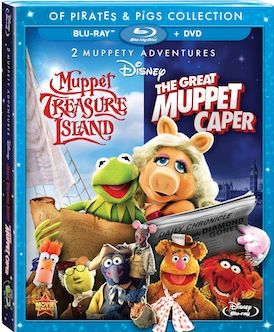 I can remember when I was a little girl, watching The Muppets. I loved all of their antics and I also enjoyed the movies as well. The Great Muppet Caper was one that I watched over and over again. Recently I was sent the Blu-Ray Combo Pack with both The Great Muppet Caper and Muppet Treasure Island for the family to watch! In The Great Muppet Caper you have the reporters Kermit, Fozzie, and Gonzo, who are ready to cover the big story. I love the humor, especially with the scenario of Kermit and Fozzie being twins, then Gonzo, obsessed with taking pictures of a chicken. Well the reporters get their big break when they head to London to cover a story about the world’s leading fashion designer, and her missing necklace. When they arrive, they take Miss Piggy for the fashion designer by mistake. Miss Piggy finds herself smitten for Kermit, and goes out of her way to try and convince Kermit that she is the fashion designer he thinks she is only to be embarrassed when she is found out. And the capers go on from there, leaving you and your family laughing and watching along as they try to solve the case! I think one of my favorite scenes would have to be the bicycle scene, which I have in a clip below.

Then in the move Muppet Treasure Island, the crazy Muppet crew is back, and in a whole new adventure! Jim, Rizzo and Gonzo are a group of friends who dream of the sea and pirates after hearing the stories that their friend Billy Bones tells them. When Billy Bones dies, he reveals to the boys a map, a treasure map that went along with his stories of pirates and buried treasure. When their friend dies, they find themselves having to escape the hands of pirates with the map so that they can start a sea adventure of their own. They head to a harbor town and meet up with the daft son of Squire Trelawney, who funds the journey along with my favorite characters, Beaker and Dr Livesey! They then set out to hire a crew and ship, the Hispaniola, along with the captain and the rest of his crew! The group face starvation which leads to a mutiny and double crossing. This is another great Muppet movie to share with the family, keeping you on edge as well as laughing throughout the movie! We enjoyed being able to share these movies with our kids and with the Blu-Ray Combo pack you get an amazing sound and picture quality, along with some great bonus features that include the sing alongs and music video that my kids look forward to! Muppet Treasure Island & The Great Muppet Caper Blu-Ray Combo Pack is available to bring home now!