As many of you may know who have followed my blog over the years, my husband and I are huge advocates for children. In fact, my husband is a CASA in our town, which means he is a court appointed advocate for children in the court room. My husband finds this passion for helping kids due to his own experiences as a child. He is 1 of 6 who were adopted by his adoptive parents, who also ended up adopting 3 of his younger biological siblings, and he is 1 of 7 kids that his biological mom had, all of which who were taken from their mom and either adopted or put into the foster care system. My husband was a toddler when he was taken from his mother, and at the time, he and 2 of his brothers had been taken from her. One was adopted by his and my husbands grandparents, and my husband and his older brother had been put into state custody until he was adopted at the age of 8. The older brother who had also been put into state custody, remained in the care of the state until he turned 18, never finding that forever home. When my husband was adopted, he found himself to be very lucky, and he and his adoptive parents found themselves torn due to the fact that because the older brother had shown behavioral issues, they could not adopt him as well. The years that my husband was in foster care, he was put in foster home after foster home, as well as many group homes, all but giving up on the dream of having a family and someday finding his forever family. This journey that he went through as a child, has lit a flame in him that is strong, and as a adult, he not only advocates for children in the court room, but he is also president of a local club called Badger Hearts, that raises money for foster kids who age out of the system and want to go to college. They raise money to purchase the kids a hope chest full of items for their first apartment or dorm. In all, he aims to continue to help foster children in the system, and give them hope that there is a light at the end of what seems to be a never ending tunnel. So, when we come across groups who have the same passion for children, we find ourselves interested in knowing what we can do to help. Recently I was introduced to such a group, called Alliance For Children’s Rights. Through this group, anyone can help a child, by donating and helping to raise awareness, which is something that touches my familie’s heart in so many ways. They help kids in foster care, to ensure they are taken care of and are loved. They understand that the reason why many of the kids are in the system is because of abuse, extreme poverty and more. Instead of turning a blind eye to these innocent children, they help them, by protecting their rights and insuring they have safe and stable homes, as well as access to the healthcare and educations they need. I was sent a hoodie from the Forever Project and when you make a donation of $75 or more to the Forever Project you can not only get a hoodie, but you can help a child find a forever home, which to a child in the foster system, is everything to them. We also appreciate that they not only help the kids who are in the system awaiting a home, but they help the ones who transition out of the system, so they can go on to college and live the life they aim to live! Another thing I like is that 100% of the proceeds, goes to helping the kids. So this year, while you are seeking out to accomplish your resolutions, help a child with their own resolution of finding that forever home, or going on to college by donating to the Forever Project today! 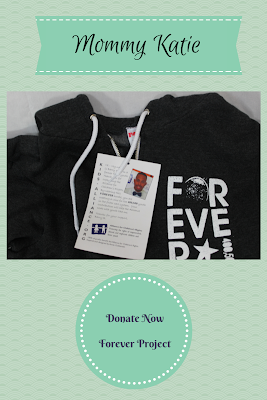